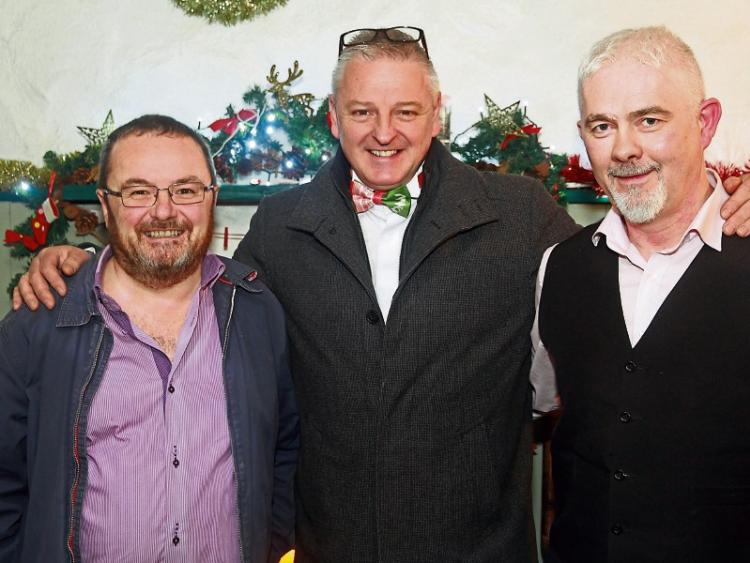 Thursday night last saw the launch of a series of DVDs on various aspects of life under the shadow of the glorious Slieve Bloom Mountains.

For two years Peter Dooley, himself a native of Neilstown, which itself is close to the Slieve Blooms but straddles nearly three counties, Laois, Offaly and Tipperary has been quietly combing the area for characters that have spent their lives enjoying the beauty and making a living along the banks of the Delour, the Nore and the hidden gem that is the “Basin” near Coolrain.

Mick Dowling is a man of many hats, he farms in Derrycarrow, he was a prominent hurler with Camross in the sixties and seventies and his Father John Joe was a member of the first championship winning team 102 years ago.

Mick has a fascination for everything associated with the Slieve Blooms and the “Cut” famous beauty spot in the heart of the Mountains. Con Galvin from Coolrain talks of life around Coolrain, the Pike of Rushall, and Shanderry and about a hurling team known as Castlemore that won their only championship 70 years ago.

Con recalls how a spill over from Camross led to the formation of Castlemore and later called Clonmore that would stretch along Rossnaclonagh and border Borris-in-Ossory. The hurling field in those days was crowded on Sunday afternoon. After training the players and followers would flock just to listen to Michael O’Hehir broadcasting on a wet battery wireless.

Hannagh Dooley worked in Dublin for many years but met and married Denis and spent the last 60 years residing near Coolrain.

Recently celebrated her 90th birthday, but every day drives the Massey Ferguson tractor while attending to her flock and loves every minute of it, and is involved in many organisations in the Parish.

Paddy Dooley from Neilstown spent many years working with the Electricity Supply Board; his first posting was in the West of Ireland but was thrilled when he transferred to Portlaoise, which was one of the big employment centres of the midlands.

Paddy worked in the office but has seen sweeping changes since he departed and then took to farming, which his parents Kitty and Michael did for many years, and recalls the famous snows of 1974 when families were covered in for weeks and the snow covered the entire buildings.

Sam Chambers says all his relations came from England but settled in Killenure. Farming and farm machinery would be his chosen subject if he ever got an opportunity to appear on “Mastermind.”

For a man who was brought up to celebrate English monarchy he comes across more Killenure than the “Mountain Hare.”

Sam just loves machinery and his hands can convert a corkscrew into a hydraulic. Sam has lived all his life down the road from Roundwood cross and his bedroom looks out across the road to the “Cut” on a summer’s morning, it has no equal. He tells a lovely witty story of his life and times.

Tommie Dooley is the son of a coach builder and lived all his life in Coolrain. His father built coaches in olden times and Tommie inherited the trade. After his father passed away, coach building like many great trades faded away but for Tommie there was an alternative as, along with his brother Dinny, they crafted hurleys and with ash plentiful and demand enormous they built up a wonderful rapport with the GAA fraternity.

Tommie is not confined to hurling and coach building.

For those with a love for water and wildlife then Tommie’s insight of the “Basin” and how it was created is worth the admission fee alone. For those not acquainted with this man made creation it is an oasis hidden behind Derryduff and Coolrain sawmills. It was built by the British many years ago and in summers long ago it would be packed with sun worshippers but unfortunately there is a certain amount of tragedy attached to it, but it could be developed as a tourist attraction.

Michael Lalor needs no introduction to any audience and his passion for life is simply incredible. Michael has suffered many losses; personal tragedies losing his daughter then his beloved wife Mary.

As a Camross hurler over many years he tasted huge success culminating in being part of the Leinster club winning panel 40 years ago, after a career that began 23 years previous.

There were many losses in those days as well but he always believed in the next match.

Perhaps his greatest disappointment was losing his County Council seat in the local elections in recent years. Michael has many passions in life and being from Northgrove Camross one would expect his greatest would be hurling, but politics would run close.

Fine Gael was his colour and he just loved the passion that goes with the trade and all his life his best friends were in Fianna Fail but when it came to politics he would debate till early morning.

He was a human dynamo and would do his utmost when he held that seat in Tinnahinch. His departure was a huge loss to the area but, like the water, you don’t miss it till the well goes dry.

All human life is there in seven well produced DVDs and all proceeds will benefit local charities.