Three Intel wins in a row for Timahoe NS 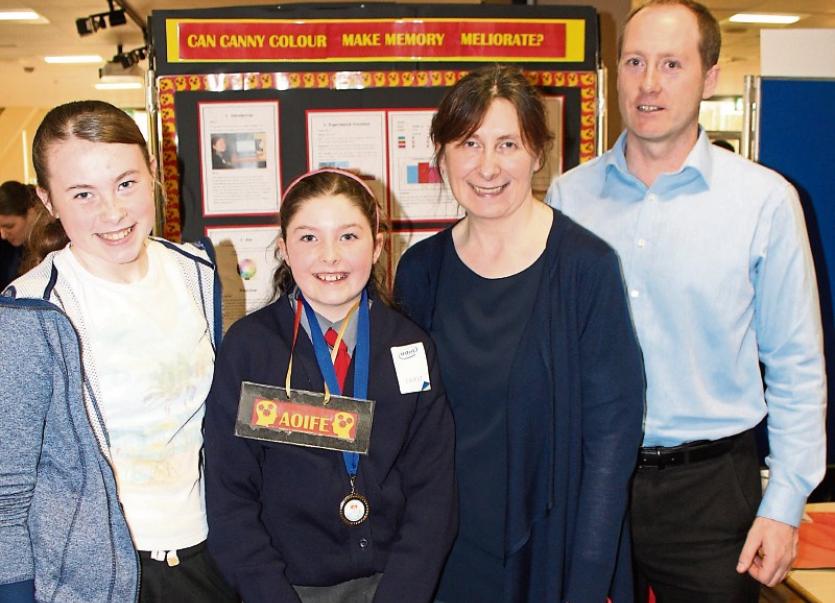 In an incredible scientific hat trick, the small Timahoe school Scoil Mhuire Fatima is in the final of the Intel Mini Scientist competition for the third year in a row.

This year it is thanks to ten year old Aoife Fitzpatrick from 4th class, who has proven that colours can help with memorising.

First winning the school's own Science Fair, judged by Intel rep Ann Tilson, Aoife and her school and family then attended the regional finals at Intel in Leixlip on December 8, where she was selected for the Intel Mini Scientist All Ireland Final, and won a crystal trophy and gold medal.

The final is on February 3 at Dublin City University, and Aoife will be one of 21 finalists, representing Laois.

Her project “Can canny colour make memory meliorate?” proves that changing the colour of text and background colour can significantly improve memorisation and retention of facts.

Aoife has big shoes to fill, as the school has won the overall prize for two years.

The achievement was honoured last May when they were all invited to the Aras to spend the afternoon with President Michael D Higgins.

“The ingredients are attention to content analysis, listening to our students, working scientifically and phenomenal dedication, found in abundance in our school community.

“I am very proud but even more thrilled for Aoife and her family as all our Intel Mini-Scientists begin at kitchen tables or on sitting-room floors, a wonderful combination of family and school in achievement, real education,” she said.

Aoife recalls the moment her name was announced.

“It felt absolutely fantastic to win a place in the final. My legs went like jelly. I never thought I’d get as far as Róisín and Jamie did two years ago, and Sinéad and Laura last year. I felt like a celebrity in school after the regional final. Ms Bergin announced it on the microphone. I even got to do a lap of honour around the school. Some friends in fourth class made cards for me and we had a party to celebrate in class,” she said.

The project was hard work but interesting she said.

“The highlight was teaching my class about the brain and memory,” she said, thanking 3rd to 6th classes who proved her theory by learning their spellings best with a yellow print on a red background.

“It would be amazing to bring home a third win for my school,” she said.