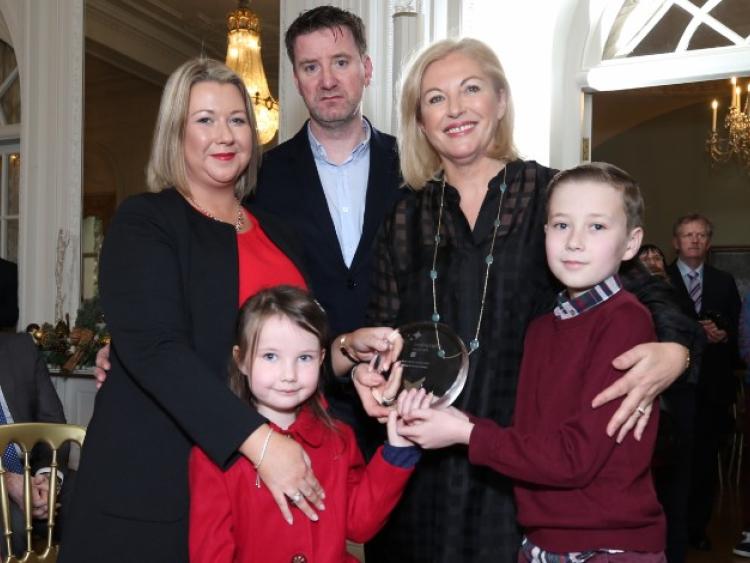 Treacy Family with chairperson of the Road Safety Authority Liz O'Donnell at an award ceremony to honour the Treacy family and others.

The campaign fronted by a Portarlington who lost a son and brother in a fatal crash caused by a drink driver is making a differance, according to the head of the Road Safety Authority.

Moyagh Murdoch, Chief Executive Officer of the RSA praised Gillian and Ronan Treacy and their children Seán and Caoimhe. The family are fronting a major campaign media campaign which focuses on the death of their son and brother Ciarán. Ms Murdoch said the family's courage is helping to deter people from drinking and driving.

"The Treacy family have really helped this year's message to get out. It focuses on their own son Ciarán. It is making a differance and people are listening to it," she told RTÉ's Morning Ireland.

She encouraged people to follow the example of the Treacy family over the festive season by taking action to stop any family and friends they know from getting behind the wheel after drinking.

Ciarán Treacy, was aged just four, when died near Portarlington in 2014 after a drunk driver ploughed into the car which was driven by his mother Gillian. His mother Gillian was badly injured while Seán survived without serious injuries.

A number of local emergency staff, gardaí and nurses also feature in the campaign which was launched for Christmas but which will run for two years.

Meanwhile, Gardaí in Portlaoise have doubled the number of drink driving checkpoints this Christmas .

While cuts have been made to the Garda Traffic Corps Nationally, extra efforts are being made this Christmas to crack down on drink driving to save lives.

The Leinster Express understands that number of daily checkpoints in into double figures over Christmas by the Laois Traffic Corps based in Portlaoise.