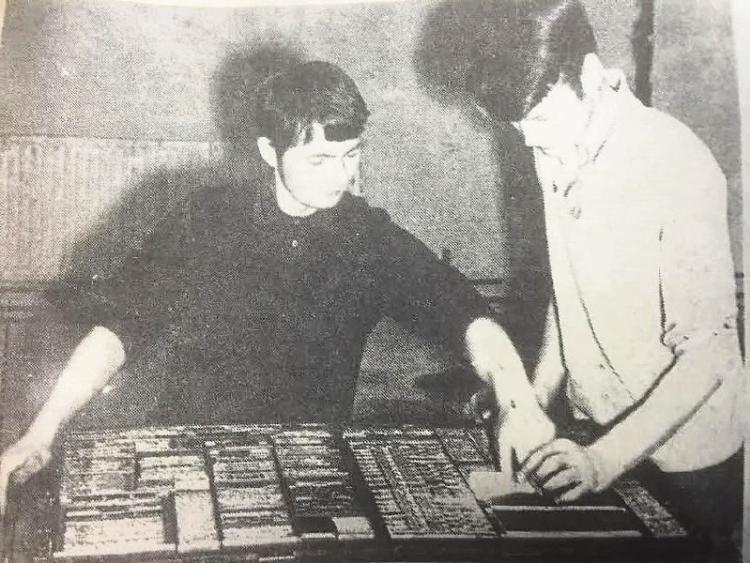 The Leinster Express in the old times, in the 1950s, ‘60s, the early ‘70s. No man is more qualified to reflect on that era than Paddy Connolly.

He remembers the exact date he began his career on the newspaper: September 12, 1949.

Living on the Mountmellick Road, he hadn’t far to travel to work in Coote Street, where the Leinster was then located.

Though coping with health problems, Paddy is still going strong. Now an octogenarian, he resides at Stradbally Road with his wife Lena and family.

The newspaper world that he joined almost six decades ago was completely different to what it is today.

Skilled printers, lead type, everything on paper, no computers, no internet.

Paddy’s job was to set type. He was a compositor. That trade, once highly esteemed, is now obsolete.

“It was a sad day when everything was changed from type to computers,” he contends. “It really done away with the printing trade.”

He recollects: “I served a seven-year apprenticeship and I had to sign indentures and under these you couldn’t be out late at night during the week.

“You couldn’t go to dances. The print trade was very strict.”

When Paddy joined the Leinster, Gordon Clarke was the proprietor. He sold the business to Freddy and Rose Townsend.

The newspaper was only part of the business.

One of the bigger jobs was the production of the electoral register. And, according to Paddy, he and his colleagues turned out the early editions of The Farmer’s Journal.

He talks of Heidleburg and Arab machines, hand-pulled presses, the Warfdale flatbed press, the web-offset press.

He explains the production process.

The reporters and advertising staff sent handwritten or typed documents, known as ‘copy’, to the Linotype operators. They transformed the material into lead type.

From this type proof sheets were printed.

These were read, checked for mistakes, corrected, and returned to the printers. Then Paddy and his fellow compositors set the type into metal frames on a table called the ‘stone.’

Next step was a process known as “putting the paper to bed,” when the metal frames were fastened to the flatbed press which, when switched on, reverberated and shook the building.

Then, hey presto, the newspaper appeared, albeit often with a fair few typos (errors).

Meanwhile, Paddy and his co-workers at this stage probably had their hands and arms immersed in Swarfega, a substance supposed to remove ink from flesh.

“The blue ink was lethal to get off,” he says.

He names many Leinster Express employees of that period, names too numerous to mention all.

Kathleen O’Brien (Dunne) was in the advertising department, as were Vera Conroy and Brenda Marum.

Also on the editorial staff was Michelle McCormack, subsequently of Sunday World fame.

Tom Keenan, who went on to become County Council Chairman, was in the printing works.

So too for a period was accomplished Laois hurler Billy Dargan

Recalling his days in The Leinster Express, Paddy enthuses:

“I literally loved it from the day I walked in until the day I left. I was married to it.”