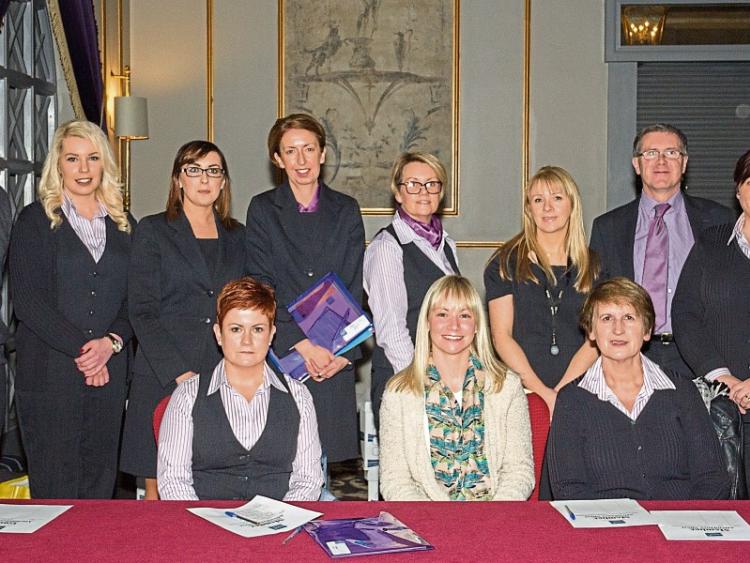 IT’S hands across the Laois/Kildare border as the Portlaoise-based People First Credit Union and Athy Credit Union have agreed to merge.

They made the decision at their respective Annual General Meetings on Monday night (December 19).

In doing so, they will create one of the midlands’ larger conglomerates with assets of almost €117m and with a 30,000 –plus membership.

At the People First AGM, Manager Sean Dunne, in reply to a question from the floor, stated: “Our door is open to mergers with other credit unions in Laois.”

Despite the reservations of some, the AGM overwhelmingly approved the amalgamation with Athy—by 117 votes to 23.

When the process is complete, two directors will resign from the People First Board to make room for two representatives from Athy.

All of which is a far cry from 1969 when Portlaoise Credit Union was established with half-crown contributions.

People First Vice Chairman Kieran Brosnan made the case to the AGM for the tie-up with Athy. The move would, he predicted, reduce costs and enable the CU to provide more services to members. And, he added, the Central Bank thought it made good, sound financial sense.

Replying to Jim Coss, Manager Sean Dunne said certain work would be centralized in Portlaoise and some would also go to Athy.

Answering Catherine Breen, he described Athy as a strong Credit Union and, he added, there was “nothing to be worried about.”

Dick Sides (a former Director of Portlaoise Credit Union): “I cannot see any reason why we should consider taking in Athy. They are very strong and don’t need us.”

Chairman Clive Davis predicted: “This merger will allow People First to build and expand its common bond with a neighbouring credit union—which will substantially benefit both organizations. Indeed, one potential benefit will be the prospect of bringing People First closer to offering a debit card facility.”

The combined membership shares are valued at nearly €100 million. Peoples First has more than €71 million worth of shares - €16.5 milion of this came from the merger with Abbeyleix Credit Union in 2016.

The combined loan book would be worth €31.5 million - it currently stands at €24.5 milllion. People First investments also go up significantly. Investments to the end of September 2016 stood at €45.3 million, but this will rise to more than €70 million if the merger proceeds.

People First's operation surplus dropped from nearly a €1million last year to nearly €345k in 2016. This was due largely to the transfer of nearly €640,000 to its operational risk reserve. The net income was €2.8 million.

The merger is the latest change in the local credit union movement.

Apart from the creation of the People First through the merging of Portlaoise and Abbeyleix, Rathdowney, Durrow and Mountrath merged with St Canices Kilkenny.