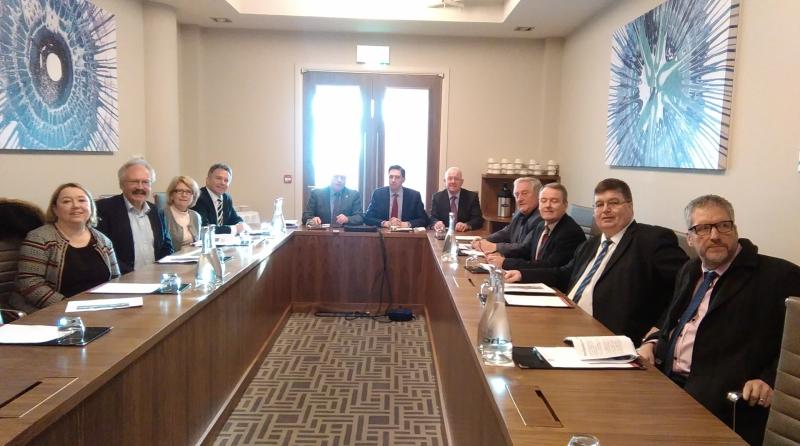 Minister Simon Harris at the meeting in Portlaoise this morning

The downgrade of Portlaoise hospital is not a "fait accompli"  according to the Minister for Health, Simon Harris who admitted that other hospitals could not cope with the removal of A&E services if the hospital's A & E closed.

Speaking after a short tour of the Midlands Regional Hospital, Portlaoise and  meeting county councillors and TDs, including Minister Charlie Flanagan, Minister Harris said he was "very aware" of the concerns over the future of the hospital.

"What I wanted to do today was say very clearly to staff, very clearly to  patients and the public, through their public representatives, was that no decision has been made in relation to Portlaoise," he said.

Speaking to reporters, Minister Harris said he had read that the future is set in stone.

"There is no fait accompli here. There is no decision made. I am very impressed with the significant progress that Portlaoise has made in recent months and years," he said.

He said there should be significant consultation with the public, GPs, consultants before reaching a decision. He said he has a report from the HSE's Dublin Midlands Hospital Group but he would not make his decision exclusively on what it recommends.

He insisted that there is more to the process of deciding what services will be located in the hospital in the future than "just that report".