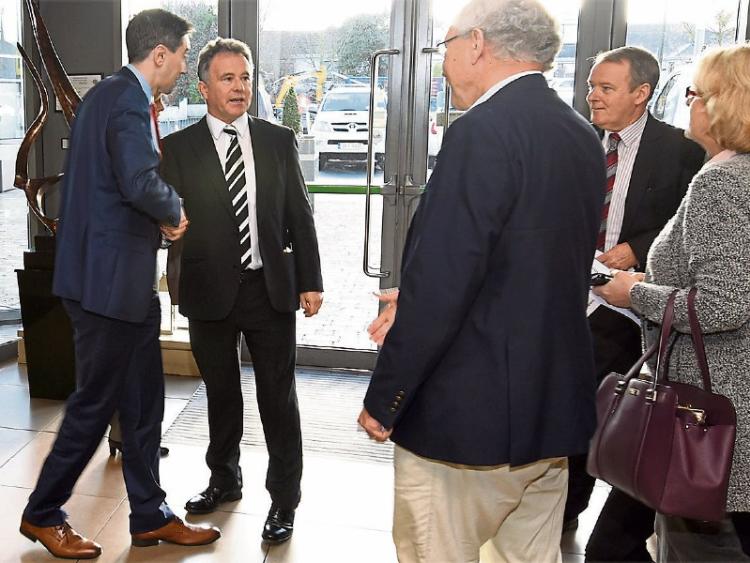 Minister for Health Simon Harris did not visit Portlaoise's A&E because it was “particularly busy”, but heard “heartfelt concerns” of staff and councillors, said Minister for Foreign Affairs Charlie Flanagan.

The Laois Fine Gael TD accompanied his party colleague, Minister Harris around the hospital yesterday, January 9, and to his meeting with ten Laois councillors afterwards.

The short notice of the meeting, at only two hours notice, was the Health Minister's choice he said.

“The meeting took place at very short notice, a random visit, which in the circumstances the minister prefers,” Minister Flanagan said.

Neither A&E nor Maternity were visited.

“He visited Medical and Surgery, and Outpatients. He didn’t have an opportunity on this occasion to visit the maternity but has committed to return.

However he did have an opportunity of engaging with a cross section of staff which I think he found particularly useful,” he said.

He said that staff spoke honestly about concerns.

“Some did, I thought that was very important,” he said.

“The minister had an opportunity of engaging and in particular, of listening to the very genuine and heartfelt concerns of the elected representatives of the people of Laois.

“The important thing was that everybody in the room seemed to be be beating the same drum, the message was made quite clear to Minister Harris , I felt that he felt that this was an important engagement,” he said.

Asked if he is now hopeful that Portlaoise will be better resourced, and that services be retained, the Minister pointed to the HSE's investments there last year.

“Over the past while, it has been consumed in negative stories, that is a pity.

“We need to acknowledge the great work being carried out by over 600 people at Portlaoise hospital.

“The visit this morning of the Minister certainly impressed him and will have a bearing on the next stage of the process now which is the publication of the HSE report,” the Laois TD said.

He said it was a first that a government minister came to meet councillors in Laois.

“I can’t recall in my time as a member of Dáil Eireann where a minister came to what in effect was a meeting of Laois County Council, organised by Cathaoirleach Tom Mulhall,” he said.

Sean Fleming TD said the meetin was “constructive” but he believed the enemy was the HSE.

“It is clear the HSE has an agenda against Portlaoise. That attitude was damaging Portlaoise the most,” he said.

Deputy Fleming said the HSE has cast a cloud ouver the hospital.

The Fianna Fáil TD praised the mprovements in maternity and said the link with the Coombe hospital should be replicated.

Dep Brian Stanley said it was positive that downgrade was a certainty.

“It is positive that he is coming to this with an open mind and the HSE's report is not a done deal.

“It is simply one of the things to consider”.