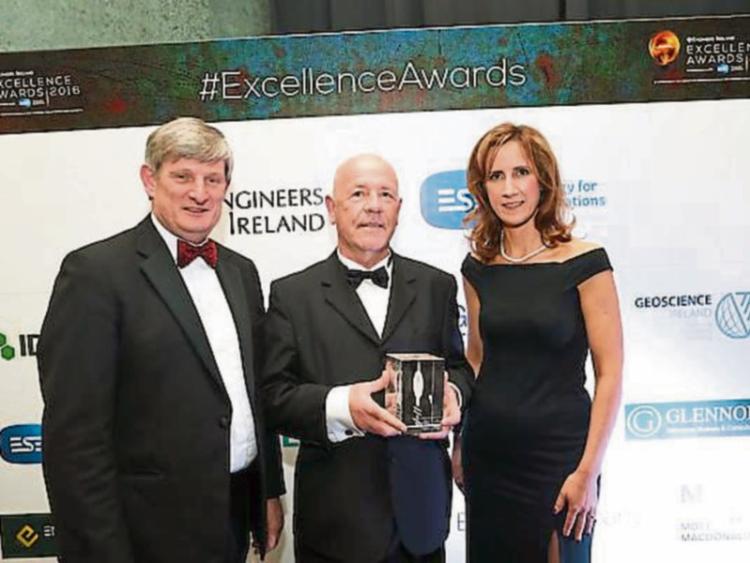 A Portlaoise man has won the International Engineer of the Year 2016.

Anthony (Tony) O'Neill has been working as Chief Resident Engineer in Vranje, Serbia for more than five years.

Prior to emigrating with his wife Angela and daughter Alana Marie) Tony was employed by Arup Consulting Engineers as the Authority’s Site Representative on the M7/M8 Portlaoise By-Pass Public Private Partnership (PPP) Scheme.

Tony grew up in Clonkeen and attended the Oak National School just down the road from his home.

Tony hails from a family of 13 (seven brothers and five sisters). His parents, Eddie and Mary, are both deceased.

Tony was nominated by a friend and colleague, Conor Ryle.

Conor's citation for Tony noted that he “graduated in 1984 as a Civil Engineer and has spent more than 25 of those on site construction supervision.

“I worked with him on the wishbone shaped 41 km M7 Portlaoise-Castletown/M8 Portlaoise-Cullahill PPP Project as a Senior Resident Engineer for a period of approximately two years.

“Tony was the Authority’s Site Representative (and an Associate Director with Arup Consulting Engineers) on this Scheme.

“Leading a Site Team of up to 12 people, Tony displayed excellent management and liaison skills which, together with his ability to deal with the complex construction and contractual difficulties, and the emphasis he attributed to safety on site, was vital to the success of the Project which opened some four months ahead of Schedule on 28 May 2010.

“He was retained by the NRA until the end of August 2011 to deploy these skills in negotiating with the Concessionaire to resolve certain financial issues relating to the 27 year Operation and Maintenance (O & M) phase and to write up a comprehensive Handover Report.

With no Projects underway in Ireland - due to the economic circumstances - he emigrated (together with his wife and young daughter) in November 2011 to Vranje in Serbia where he assumed the role of Chief Resident Engineer on the Construction Works on Highway E75 (Grabovnica - Levosoje).

“Vranje is a small city in a rural backwater and the experience of living here was particularly stressful for his wife and child with the language barrier compounding their difficulties.

“Almost on a daily basis they wondered what they were doing here and if they could survive.

“But they persisted and they did. Against this backdrop, Tony’s contribution as Team Leader/Chief Resident Engineer to the infrastructural development of Serbia’s roads network has been quite remarkable as set out hereunder:

- Donji Neradovac– Srpska Kuca Section, 7.95 kms long, costing 21,847,837.71 Euro, funded by a donation from the Hellenic Plan for the Economic Reconstruction of the Balkans (HiPERB) and opened to traffic on 14 November 2013

“In conclusion, I believe this award should acknowledge, not alone his contribution and successes, but also his family’s resilience and courage in a very different and difficult environment.”