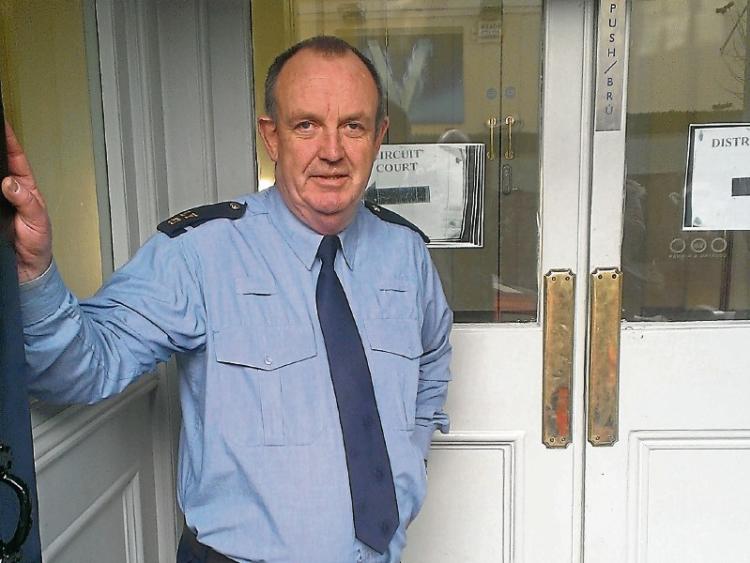 Tributes have been paid to one of the area’s best known and respected gardaí, who is set to retire after 34 years’ service.

Garda Jerry Dillon is a familiar face locally, having spent virtually all of his 34 years as a peace officer in Portlaoise. When he retires on January 27, he will take up a new role as the Sheriff of Laois.

A native of Charleville in Cork, he first worked with the naval service from 1978 to 1982, stationed in Cobh initially before he served six months in the Lebanon with the United Nations.

Joining the gardaí in 1982, Garda Dillon came to Laois in 1983.  #Married to local woman Elizabeth, they have two children, Anna, who is at secondary school, and Garrett, who plays for the Laois football team.

Speaking to the Leinster Express, Garda Dillon, who was Garda Representative Association representative for many years, revealed the key to his popularity among all who encountered him.

At last week’s district court in Portlaoise, on behalf of the gardaí, Inspector Aidan Farrelly congratulated Garda Dillon on his 34 exemplary years’ service, and said for the last two years he had been the court garda where he had continued to provide an exemplary service.

Mr Philip Meagher thanked Garda Dillon on behalf of the legal practitioners of the area, praising his courtesy and professionalism throughout the years.

Garda Dillon was also thanked by Judge Catherine Staines, and previous well wishes were voiced back in December by Judge Keenan Johnson, who said Garda Dillon had always carried out his duty very diligently.

Garda Dillon said he was very humbled by all the kind words expressed, adding with a laugh: “I wasn’t that good.”

Garda Dillon said he would like to wish all his former colleagues well .