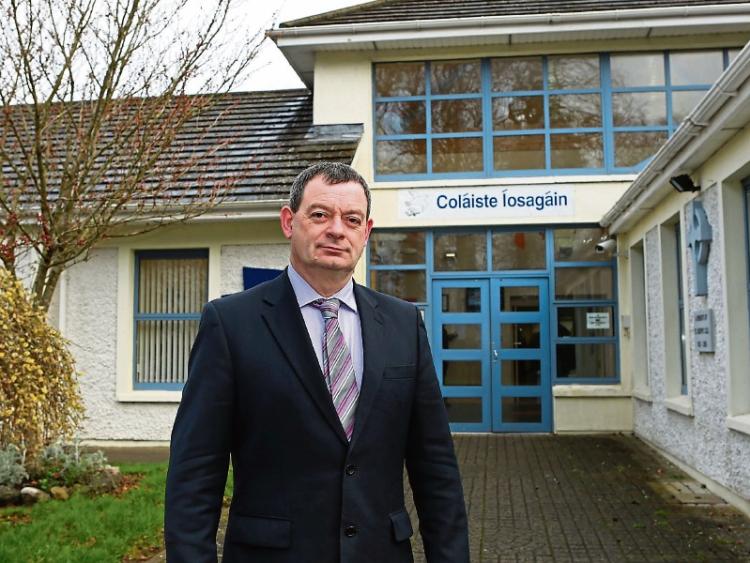 The sod may be turned on a major extension at the overcrowded Coláiste Iosagáin secondary school in Portarlington, later this year.

With libraries and prayer rooms already turned into classrooms at the 970 pupil school, it is “bulging” at the seams, says Principal Seamus Bennett.

He hopes that new buildings to fit 1200 pupils, promised by the Dept of Education, could soon begin.

“We hope to be turning the sod in 2017. We are delighted to get it. The architects and engineers are in place, we are now considering the new design, and it will then go to tender for construction,” he said.

First a two storey extension will be built behind the school. After pupils move in, the oldest part of the school, a 40 year old one storey building that was once Scoil Mhuire, will be knocked.

A two storey building will go in its place. All prefabs will then be removed and grounds and pitches reinstated.

“It will take at least two to three years. It has to be phased as the school must stay open,” the principal said.

He will be glad to see the oldest section demolished.

“The roof and insulation are poor, and the corridors are narrow,” he said.

Planning was sought from Offaly County Council for a prefab with six classrooms and toilets. It will bring the total to 16 prefab rooms, including two ASD classrooms. That application was incomplete but will be remade.

“They will be in place by September, they have to be. Hopefully they will carry us over, we are pretty much cramped,” Mr Bennett said.

Prefabs have limited use.

“The problem is specialist subjects like science, tech graphics, home economics, metal and woodwork. You don’t get that equipment in prefabs, so it forces pupils to choose, rather than offering a full curriculum,” he said.

Coláiste Iosagain is the only secondary school in the rapidly growing town.

Another 195 first years are expected in this year, with pupils coming from as far as Walsh Island in Offaly down to Emo. It will soon be the biggest secondary school in Laois, and that brings pros and cons the principal said.

“As it gets bigger, we get more of everything. There is no excuse for not offering all subjects, and we get the resources to meet the needs of all students, regardless of ability. Yes the personal connection between me and the students is broken, I don’t know them all, but the years heads do and so I rely on them,” Mr Bennett said.