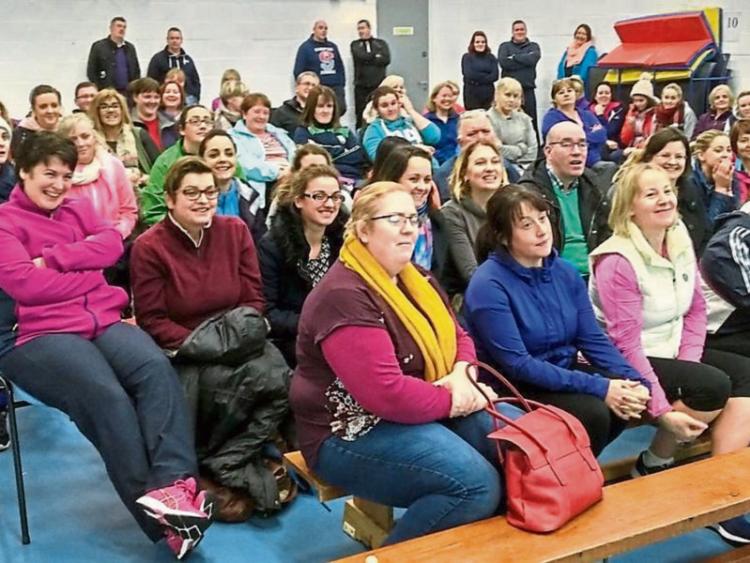 Over 100 people from Stradbally, Vicarstown and Timahoe weighed-in for a team combined weight loss competition over six weeks as part of a health and fitness programme for 2017.

The event took place at St. Coleman’s National School in Stradbally which is co-ordinated by Laois Sports Partnership (LSP).

Various fitness training events have been organised by the co-ordinators for each area. The co-ordinators are Niall Creery for Stradbally, James McGovern and Andrew Murray for Vicarstown and Dominic Hartnett for Timahoe.

There are six leaders from each group who will facilitate sporting and fitness events on Monday and Wednesday evenings and Saturday mornings based around peoples fitness levels.

LSP co-ordinator Caroline Myers said, “A grant of €40,000 was obtained for a community hub in the area through Sports Ireland. This initiative is about bringing communities together, kicking off the sports hub and a follow on from the recent Operation Transformation walk in Heywood Gardens in Ballinakill. Each group will have their own activities over the six week period but people can get involved with each other’s groups if they wish to. It’s also about people’s mental health as well as their physical health. By getting outdoors and becoming active people meet and chat and have a laugh as well as train, it’s a fun way to get yourself fit and healthy for the New Year.”

A Facebook page has been set up for people to follow called - SVT Operation Transformation 2017. The page will be up-dated regularly with information on each group’s progress, details of the training and activities of each group and will also include various healthy recipes.

The grand finale will take place at the parkrun in Vicarstown on Saturday 18 February where all leaders will compete in the five kilometre run. The final weigh-ins will take place after the run then the winning group will be announced.

After the six week competition the three groups will come together as one for the following nine months to keep up their fitness regimes and to build up the community hub.

Dr. Diane Cooper from Portarlington is a lecturer at Athlone Institute of Technology, BSc in sports science, a researcher in exercise, physiology and metabolism and a partner at True Fitness in Portarlington. Dr Cooper was invited by LSP to talk to the group about nutrition and fitness and to give tips and motivation on how to succeed in weight loss.

During her presentation Dr Cooper spoke about health, fitness, exercise and foods to avoid eating. These include all fast foods, confectionary, fatty foods and low fat dairy products, anything that comes in a box along with fizzy drinks and cordials.

“When we were children the size of our dinner plates was nine inches wide. Now they are made 12 inches wide. Our portions are way too big. Your dinner plate should be made up of 50% vegetables, 25% lean meat and 25% of your carbohydrates like potatoes or brown rice. I have a 90/10 rule that I go by. I eat 90% fresh food and 10% of things that I like. I’m not going to even lie to you; sometimes I am partial to a bar of chocolate and a coffee or two.” she said.

More information is available from Laois Sports Partnership by phoning 057 8671248.