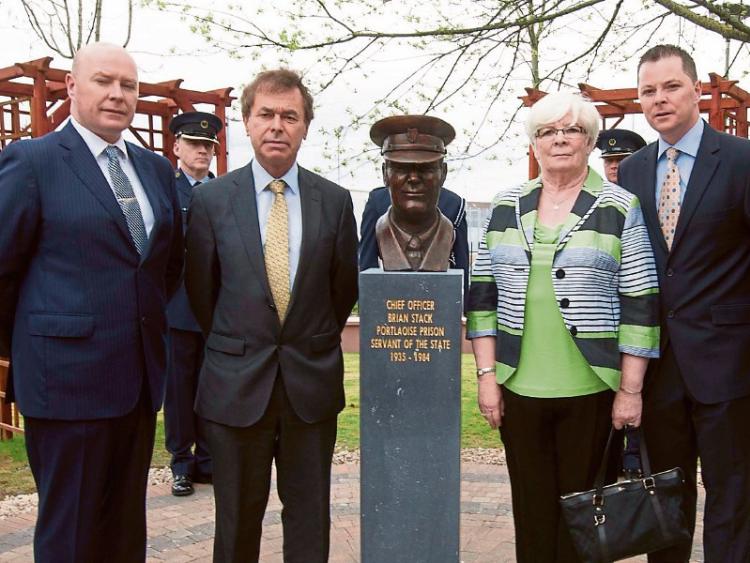 On 7 December Deputy Gerry Adams made a personal statement to Dail Eireann in relation to the murder of Brian Stack, who was the Chief prison Officer in Portlaoise Prison.

In making a personal statement Deputy Adams was allowed ten minutes to present his narrative unchallenged and uncontested, and to have this narrative written into the Dail record.

The Stack family view this statement as a grotesque attempt to mislead the institutions of our democracy.

As no member of the Stack family is a member of Dail Eireann we have not been afforded the same opportunity. Therefore we are today placing the following facts before the people of Ireland.

My father was a loving, caring and wise man, he was loved not just by his family but also by his community and colleagues.

We have received a large amount of messages of goodwill and support over the last number of weeks from former colleagues and the ordinary people of Portlaoise and beyond.

We would like to thank each and every one of you who got in touch, your support is very much appreciated.

We have also received support from right across the political spectrum which has given us renewed strength and it has shown us that we are not alone.

We also very much appreciate the Taoiseach’s invitation to meet with us.

During meeting we outlined our concerns to the Taoiseach in relation to the current investigation, we requested that the State but more resources into the investigation and we asked him to ensure that that political considerations are not allowed to play a part in the investigation.

On the 25th March 1983 as my father walked down Washington Street in Dublin after attending the National Senior Boxing Finals, he was shot from behind in the most cowardly way possible. Deputy Adams has tried over the last few weeks to contextualise the murder of my father using terms such as “war” and “combatant”.

Brian Stack was not a solider and neither was he fighting in a war.

Brian Stack was a Chief Prison Officer, his job was to protect society by ensuring that some of the most dangerous criminals ever to come before Irish courts served their time fully.

This meant among other things stopping the flow of guns and explosives into Portlaoise prison, Brian Stack was good at his job and was therefore targeted by the IRA for assassination. That is the context of what happened on 25th March 1983.

For over thirty years the Sinn Féin/IRA movement had denied involvement in my father’s murder. As late as March 2013 Deputy Brian Stanley denied any IRA involvement.

Following Deputy Stanley’s denial I emailed the office of Gerry Adams and requested a meeting, this followed numerous public requests for a meeting that went unanswered. Deputy Adams agreed to meet with myself and my brother Oliver in Leinster House on 09 May 2013.

In his statement to the Dail Deputy Adams referred to “a note” of that meeting and released this to the media. This “note” is not an agreed or approved record of this meeting, there was no approved note taker and none of the four people in the room took notes. He needs to correct the Dáil record in this regard.

It was a very big step for our family to take in approaching Deputy Adams but we felt with the passage of time there might be an opportunity for us to get some answers.

We are not a bitter family and all we wanted was the truth.

That truth we were looking for was an admission that the IRA murdered my father. At no stage during that meeting did I give Deputy Adams names of individuals who I felt had questions to answer in relation to my father’s murder, this was despite Deputy Adams asking me if I wanted to give him any information that I possessed.

I did however ask Deputy Adams to use his undoubted influence within his movement to see if information could be obtained.

We entered into a confidential process with Deputy Adams which was built on trust.

The confidentiality agreement was for the duration of the process. Deputy Adams insisted upon three things when we entered this process:

That we not contact the media for the duration of the process.

That when the process was complete that we thank him publicly.

That we publicly say at the end of the process that we did not want to see charges brought against individuals in relation to my father’s murder.

This process lead to a meeting with a former senior IRA leader.

Deputy Adams described this man to us as a “trusted friend” and said that he had tasked with “investigating” my father’s murder to see if he could obtain any information.

This individual obviously reported back to Deputy Adams as on our way to the meeting he told myself and Oliver that we would be “getting an admission” that the IRA were responsible.

Deputy Adams stated in the Dail that we were taken to a location in Northern Ireland as pre-arranged.

This was not pre-arranged or agreed with either myself or Oliver. Deputy Adams told us that at all stages we would remain south of the border. Deputy Adams should correct the Dail record in this regard.

In the statement that we were given the IRA admitted responsibility for murdering my father, saying the operation was carried out by a figure who had a leadership role.

However, crucially they tried to avoid ultimate responsibility by stating that the operation was not sanctioned. This version of events was disputed with Deputy Adams and the IRA leader at the meeting.

The IRA leader did however confirm to us that those responsible were alive, were not prepared to meet with us and that the leader of the operation had been disciplined.

All this indicates to us that the man we met knows the identity of those involved in the operation.

This is crucial as Deputy Adams is the one person who can identify this individual.

Following the meeting we thanked Deputy Adams as he had insisted, we had no difficulty doing this as we had gotten about seventy percent of the truth.

However, we refused to include a line in our statement which asked for no prosecutions as we felt that we had not been told the whole truth.

Deputy Adams rang me prior to my family issuing a statement on the process asking me why we hadn’t included this line.

At the time I give Deputy Adams our reasons for this. At all times during the process and afterwards we respected the confidentiality of the process.

Deputy Adams has stated on numerous occasions over the last few weeks that the Stack family broke the confidentiality of the process but he has yet to explain in detail how this was done.

However, it is an undisputed fact that Deputy Adams broke the confidentiality of the process by emailing names to the Garda Commissioner that he said had been given to him by me.

He said that I gave him these names during a meeting that took place in confidence. I did not gives Deputy Adams these names. Deputy Adams must correct the Dail record in this regard.

In his statement to the Dail Deputy Adams clearly tried to mislead the public by insisting our process was part of the peace process.

He used the example of the Independent Commission for the Location of Victims Remains as part of this deception. The crucial difference between the Commission and our process is that there is specific legislation in place to aid the work of the Commission.

As much as Deputy Adams would like to see an amnesty put in place for those who have committed the most heinous of crimes, as a legislator he is surely aware that no such amnesty or law exists.

Therefore to try wrap the peace process around his continued insistence that he will not aid a live murder inquiry is a gross deception.

The Stack family note that on several occasions Deputy Adams has publicly called on anybody who has information regarding the murder of my father to go to An Garda Síochana.

His own reluctance to do just this seems to imply that he holds himself above the law and is willing to apply a different set of standards to himself than he would to any other citizen of this republic.

If Deputy Adams does not present himself to the Gardaí we would fully expect that they would take steps to have him questioned.