Elderly patient forced to sleep on seating at Portlaoise A&E 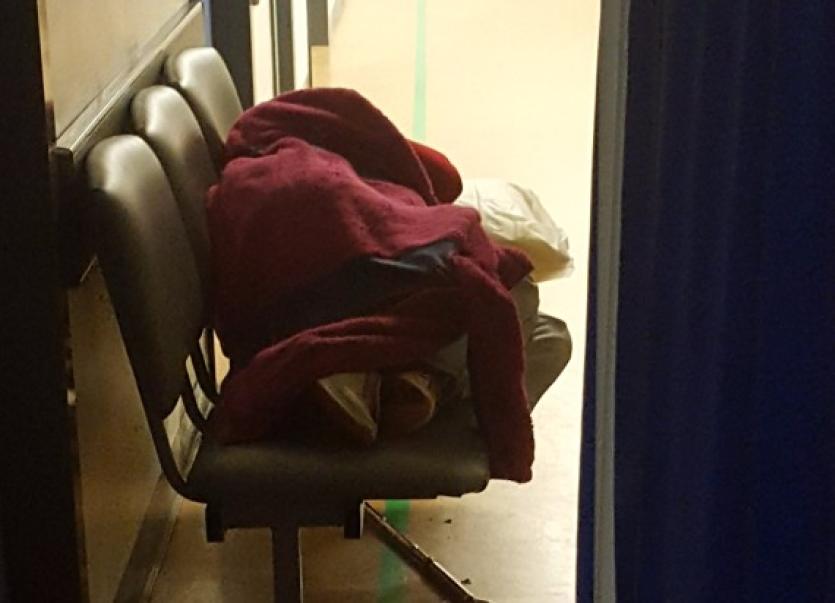 A picture taken by a member of the public at Portlaoise A&E appears to demonstrate the problems faced by patients trying to get treatment at the hospital.

With the Midlands Regional Hospital Portlaoise experiencing another busy day - 29 waiting for admission  according to the Irish Nurses and Midwives Organisation - a picture taken at the hospital claims to show that elderly patients are forced to use seating.

The person who took the photo claimed it was taken in the A&E on Wednesday evening about 6pm. It was claimed that the woman was aged in her 70s and forced to sleep on waiting area chairs in corridor. The picture shows a walking stick visible under the seats.

"The area was like a war zone. Staff were terrific," said the member of the public who took the photo.

The daily trolley watch figures for Portlaoise show that of the 29 patients waiting for beds on Wednesday, there were 21 people in the Emergency Department (ED/A&E) and eight on wards.

It has the highest A&E trolley count in the Dublin Midlands Hospital Group which also includes Tallaght, St James', Tullamore and Naas hospitals.

Portlaoise has been one of the busiest hospitals since December and has had a consistently high trolley count.

In its report before Christmas the Health Information and Quality Authority found the situation at the A&E was 'unsustainable' without a decision on the hospitals future or a commitment to fund it as a level three hospital with 24 hour emergency services.

It is widely believed that the HSE has submitted a plan to the Minister for Health, Simon Harris, which calls for downgrade including A&E closure, as part of a shakeup of the DMHG.

During a recent visit to Portlaoise, Minsiter Harris admitted that "the dogs in the street" knew that there was not enough capacity in the system to cope with the closure of any A&E.