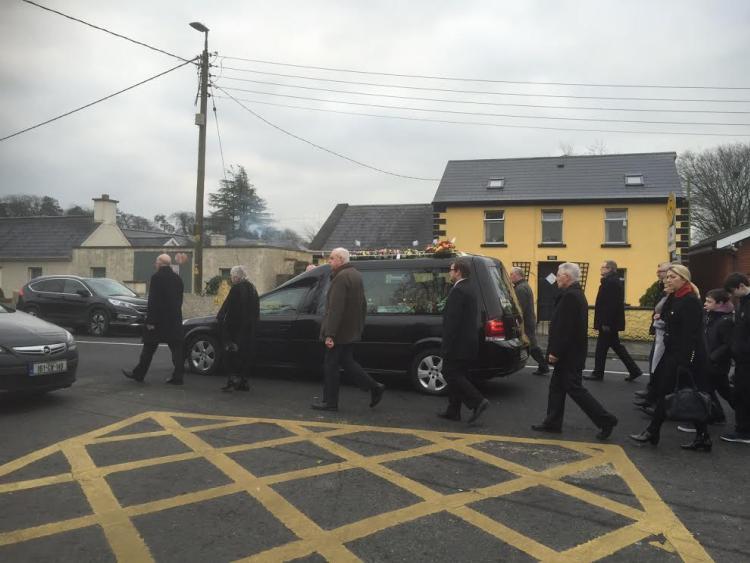 The funeral of Kathleen O'Brien in Portlaoise

The Funeral Mass of former Councillor and community activist, Kathleen O'Brien has taken place this morning at SS Peter and Paul's Church, Portlaoise.

Huge crowds attended the Mass and Burial. Guards of Honour were provided by Laois County Council, the Fine Gael Party, St. Joseph's Accordion Band, the UN Veterans Association and Portlaoise Tidy Towns.
In his sermon, the Chief Celebrant Fr. Paddy Byrne spoke of Kathleen's O'Brien's full life. "She was ill, but she never was dying," he told the large congregation.

"She had a very keen sense and value of the people of Portlaoise. She was a public servant in the real sense of the word. She personified what the new politics is all about."

An instrumental member of St. Joseph's Accordion Band, Fr Paddy noted the band's moving tribute to Kathleen as her remains made their way to SS Peter and Paul's church from her home at Millview.

He also spoke of her work for Portlaoise Hospital. "She was the cornerstone in organising a meeting in St. Mary's Hall on the hospital six months ago. "Many of the parish team were in contact with her at the time and were doubting such a meeting would be possible.

"She was steadfast and resolute about it, and ended up chairing a very successful meeting about the fundamental right of the people of Laois and the midlands to maintain essential services in Portlaoise Hospital, and also that the A & E is such an important place in the life of the community.

"In memory of Kathleen O'Brien, let's be vociferous, and let's defend this fundamental service,and let the hospital continue to grow its essential services that are so very necessary," Fr Paddy implored.

Kathleen's son, Andrew thanked everyone who had attended the funeral. He thanked the Kitchen Choir for their music and the nursing staff of the Oncology Unit in Tullamore Hospital.

Noting her involvement with St. Joseph's Accordion Band, he recalled that the trips the band took, especially to places like Tennessee, were some of the best times of her life. He also thanked the UN Veterans Association, of which she was an associate member.

Though his parents were born in Portlaoise, they moved to Kilbarrack, Dublin in 1968, and were very involved in the community there.
When they returned to Portlaoise in the early 1980s, Kathleen worked for the then parish priest, Fr Gregory Brophy.

She first became ill with breast cancer in 1992. When she successfully recovered, she joined the Irish Cancer Society and became a counsellor, speaking to and offering support to other victims.

Of her political career, which encompassed the Town Council, Laois County Council and Peace Commissioner,  Andrew noted that she was an activist, and she was closely allied with Willie Aird and the late Tom Keenan. She was proactively involved in the Portlaoise Hospital Action Committee.

When it came to Tidy Towns, one of the highlights for her was when the Portlaoise group was acknowledged nationally, and travelling to the Helix in Dublin with Jerry Lodge to receive the prize.

"She was a huge presence in the town, and she loved and lived every bit of it," Andrew said.
"She has left a mark. She gave of her time and service very generously and shared it, often without any regard to her own convenience or comfort."