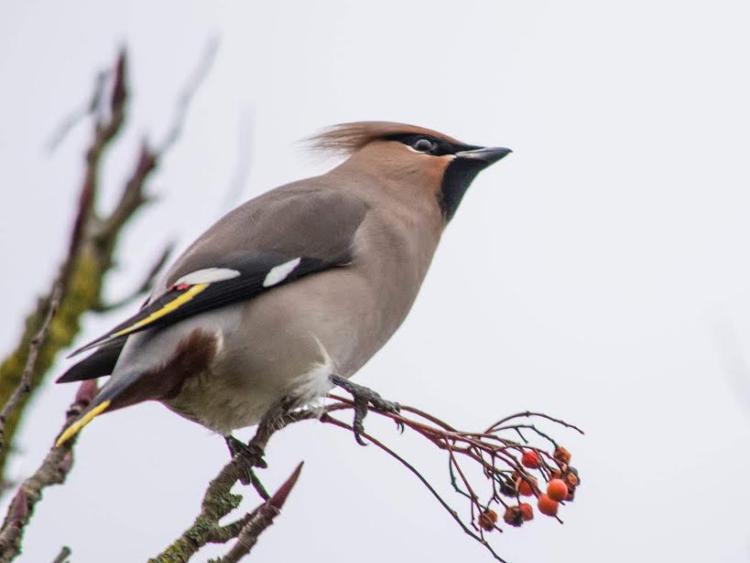 A flock of about 25 Waxwings caused some excitement when they arrived in the trees close to the Killeshin Hotel in Portlaoise late last week.

The birds lodged in the berry trees near the hotel.

Freezing temperatures across Europe have sent these exotic starling-sized birds to Ireland in search of food. According to Birds Ireland the number of waxwings sighted in Ireland over the past fortnight has been unusually high.

The birds get their name from the shade of red that tips their wings which has been likened to red sealing wax. They nest in northern Scandinavia and winter in central Europe.

Though a number visit Britain and Ireland most winters, as cold weather across Europe and Scandinavia depletes their staple diet of berries, they have been spotted in larger numbers here this year, said Eric Dempsey of Birds Ireland.

"These movements are called ‘irruptions’. Over the past few weeks, irruptions of waxwings have been seen along the east coast from Antrim to Wexford. As they deplete their supplies of berries, of which all varieties of rowan are among their favourite, the birds are beginning to move inland in search of fresh supplies.

"They are usually found in ‘tastefully planted’ urban estates. More flocks are expected over the coming weeks," said Eric Dempsey.

The largest flock recorded so far this winter, he says, was one of about 150 birds seen in Lucan, Co Dublin. Flocks of up to 400 have been spotted. The best places to see them are in areas where there are rowan or pyracantha trees.

Waxwings will also feed on apples that have been cut in half and speared on branches. In summer, waxwings feed on insects caught in flight. They are generally not seen in Ireland later than March.