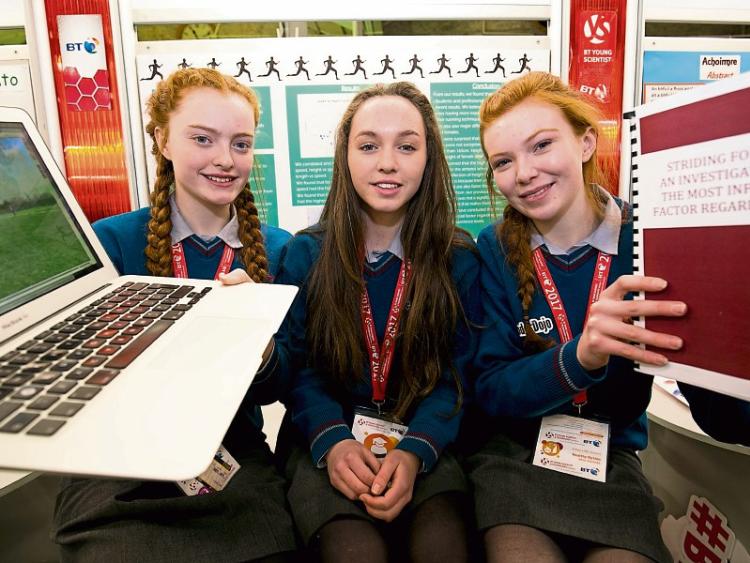 Four teams of Laois students exhibited projects at the 2017 BT Young Scientist & Technology exhibition, while a Rathdowney native who attends school in Tipperary, won two of the prizes.

Portlaoise College and St Mary's CBS Portlaoise each had a team chosen for the competition, with two more from Heywood CS, Ballinakill. Just over the border in Tipperary, Coláiste Phobal Ros Cré, with many Laois students, had another two projects on show.

David Moran from Rathdowney won on the double for his school, St Joseph’s College, Borrisoleigh, with teamate Liam Ryan. Their project 'Unlicensed to Kill' showed their device that prevents unlicenced car drivers from starting a car, potentially saving lives.

They won the Intellectual Venture Award, which includes a trip to Seattle this summer, and came 3rd in the Intermediate Technology category. St Joseph's had six projects and won six prizes.

The Heywood CS team of Ruth Bergin and Maeve Weston exhibited their study on the effect of praise and criticism on academic performance of schoolchildren.

"We learned so much, by not only writing the report but by talking to hundreds of people. We had so much fun. We really enjoyed doing the work, it definitely paid off,” the students said.

The second Heywood team of Sarah McMahon, Jessica Barrett and Florianna Mezzapelle, had 'Striding for Speed' as their project.

“We have been working consistently in Heywood to make the Young Scientist a regular event, with 8 projects qualifying in the recent past and a number receiving awards. The process of working on and presenting projects gives students fabulous experience and develops skills in using scientific methods, statistics, IT, teamwork and communication, skills they have for future projects in third level and beyond,” he said.

The Portlaoise College team were second years Emma Lynch, Saorcha Lawlor and Ben O' Rourke, who showed there is no significant difference between bottled and tap water, with the aim to reduce plastic bottle usage.

“They were delighted to have the opportunity to be involved in the young scientist. They have been very busy carrying out a number of chemical tests on their samples and compiling their results,” said their teacher Mr Lawlor.

Portlaoise College principal Noel Daly is “delighted with the success of the students and the Science Department”, crediting the college's emphasis on STEM subjects.

The CBS team of Alan Bowe, Killian McGannon & Ben Conroy had a topical project ''Smoking is Killin... Vaping is?'', and had Fianna Fáil leader Micheal Martin stopped by their stand to tell them it was he who introduced the smoking ban whilst Minister for Health.

“They really enjoyed the buzz about the whole event. They had never attended before. They felt lucky just to qualify in the 550 projects chosen out of 2,091 entries. They got a lot of visitors. Many older people came to enquire about their own usage of Ecigarettes,” she said.

“It was a real confidence boost, they learned a lot, and had a chance to network with other schools and look at college stands,” she said.

The school bussed up over 150 CBS students from second and Transition year.

“That will spur us on more for next year,” said Ms Felle.

TYs Peter Maher and Alan Mullally demonstrated how an electric toothbrush can charge a mobile phone.

“We didn’t win but we never went up with winning in our minds. We met so many intelligent interesting people and gained so much experience and the judges advised on our next steps with our project,” said Peter.

“Saturday was our busiest day, when the general public visited. We also got to see ‘The Science Show’ and ‘The David Meade Show’, and other stands. Everyone should try to enter because this has been a great adventure, the best experience,” said Alan.

“I had an amazing experience. I made new friends and developed more confidence as I had to explain my project to many people and judges,” she said, thanking her family, friends and school for their support.