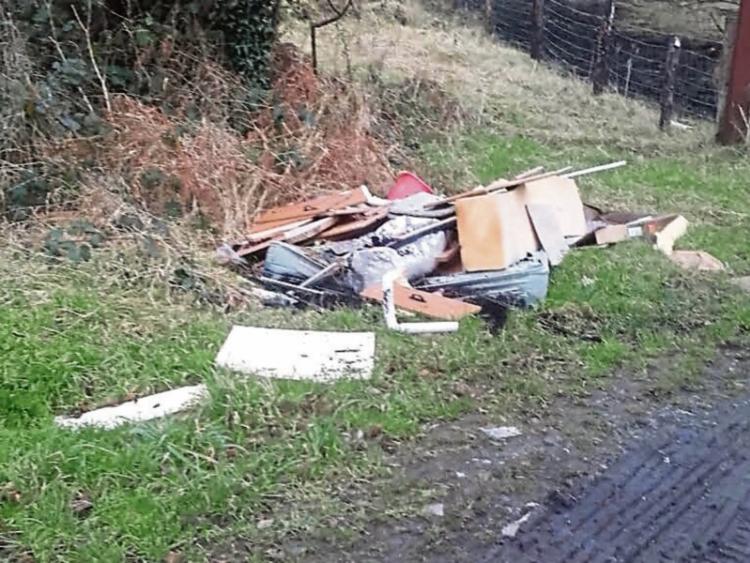 Illegal dumping since Christmas is the worst ever seen, according to the Cathaoirleach of Laois County Council, Tom Mulhall.

And residents who live on a road on the outskirts of Portlaoise are tormented by fly tipping on a daily basis.

Cllr Mulhall pointed to a spate of dumping at the Derries, Ballybrittas as “a prime example of what is going on all around the county.

“People who are doing this are getting more brazen,” he states.

“This is not just confined to one area, it is happening all over the county.

“As a county we are doing our level best through Laois County Council and Laois Tourism to promote and sell what we have in the county, in terms of places such as Emo Court and Heywood Gardens.

“However, much of our work is being undone. At this time of the year, when hedges are cut and cover is light, the extent of the problem is very obvious,” he said.

The residents of Ballyclider, Portlaoise are at their wits end over dumping.

There are just four houses on Higg's Lane but the residents there are faced with a monthly clean up. Last Saturday, January 25 they filled 30 bags of rubbish from the ditches. By yesterday, Monday, a further three bags were dumped and a sink was thrown into a field.

“This is a disgrace and we are asking that litter signs be placed at both ends of the road as soon as possible,” said Ann Maher.

The Council has tendered for signs but they have not been purchased. The road is just a half mile long, but is used by many as a shortcut for dumping.

The residents also want the Council to install CCTV on the lane.

Cllr Mulhall believes that the stakeholders need to formulate a litter plan.

“I am calling on Laois County Council, the Gardai, IFA, Community Alert, Neighbourhood Watch and community groups to come together and try and see what we can do to stop this scourge. Clean Up Week is coming in April and I think most community groups are going to be overwhelmed by the volume of rubbish that is being dumped.

“ I don't think the penalties are severe enough. The Government should change the legislation to name and shame people who are caught dumping.

“Since Christmas it has got particularly bad. Our three Litter Wardens are stretched to the limit.

“Laois County Council will have to put a tender out for a contractor to clear some of the worst sites. Coillte has been inundated with the costs of clean ups.

“This is taxpayers money that could well be used elsewhere,” said Cllr Mulhall.