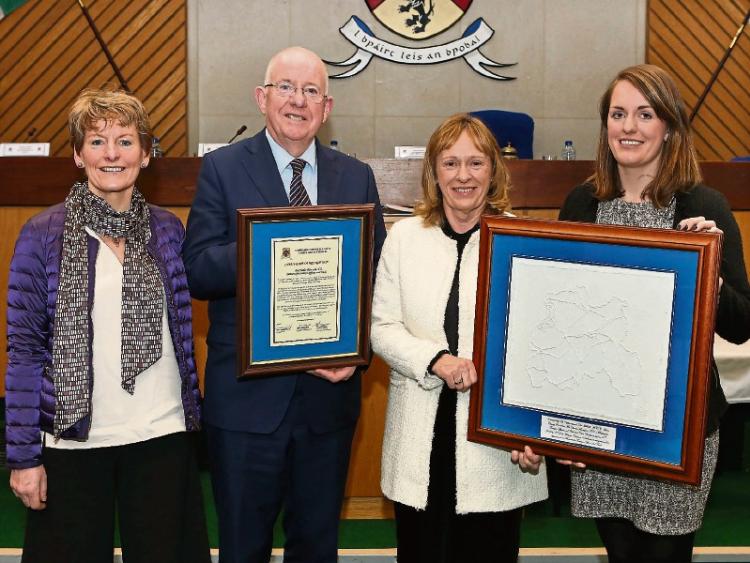 It is, no doubt, a question that is troubling Foreign Affairs Minister Charles Flanagan how do you handle Donald Trump, American’s irascible new President?

Well, perhaps, the answer was provided in County Hall in Portlaoise on Monday evening (January 23).

It came from Cllr John King, Chairman of the Borris-in-Ossory/Mountmellick Municipal District.

He advised Charles: “When you meet Donald Trump, let him talk first. You listen, and I am sure you will manage him well.”

The occasion was a civic reception to honour Charles Flanagan and to recognize his appointment as Minister for Foreign Affairs and Trade.

It was County Council Chairman Tom Mulhall who told of Charles’s career in the licensing trade.

In the 1970s, the then young student worked part-time in the thriving Montague Motel.

“He washed delft and glasses,” Tom recalled. “He was doing all kinds of jobs and he was a good man to pull a pint of Guinness as well.” (That, maybe, would be a way of taming Trump?).

Back to Cllr King. Could Charles increase Mass attendances by revising the habit of having church gate political rallies? he wondered.

He noted that the famed Oliver J Flanagan, Charles’s father, used to get off the train at Ballybrophy, get on a bicycle, and cycle miles to address after-Mass rallies in the area.

Staying with Oliver J, Cllr Willie Aird said the redoubtable Mountmellick man had once reprimanded him as follows: “Don’t come to a meeting on a tractor and get your hair cut!”

This despite the fact that at the time Oliver’s own son, Charles, had hair down to his shoulders, Willie mused.

Charles quipped to the gathering that someone had told him the civic reception would entitle him to free parking for life in Portlaoise and Mountmellick.

On a more serious note, he said he had met people in their 70s and 80s who had informed him that over the years they’d never marked a ballot paper with a name other than Flanagan. That moved him.

Cllr Mulhall presented Minister Flanagan with a citation and with a sample of Mountmellick lace. To Mary Flanagan, Charles’s wife, he presented a bouquet. There, too, was their daughter Olwyn.

Among the large attendance were current and retired public representatives, including Charles McDonald. With him was his wife Lily, an aunt of Charles Flanagan. Also present was his sister Maeve.

Senior Executive Officer Carmel McNicholl welcomed everyone to the reception. Also involved in organizing the event were Director of Services Donal Brennan and executive Irene Delaney.

Minister Flanagan, in his address, thanked everyone who had helped him in his political career, including office staff Rose Williams, Conor McSweeney and Rosemary Whelan, and legal colleagues John and Robert White.