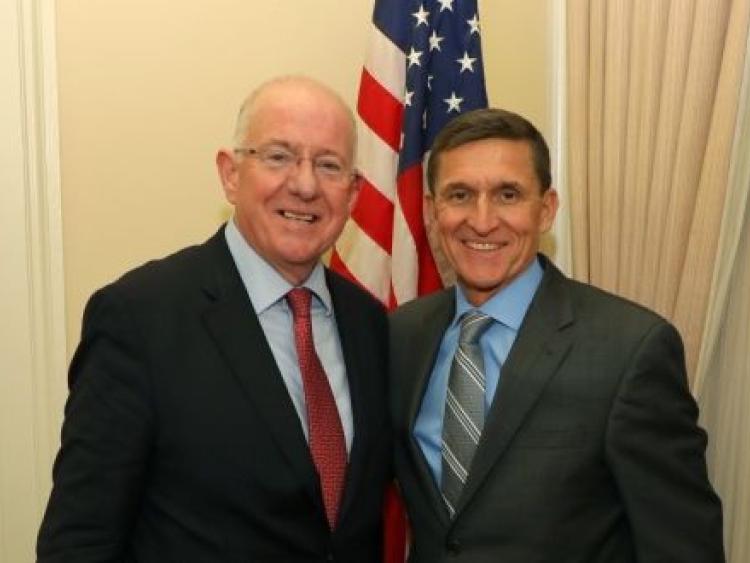 Laois TD and Minister for Foreign Affairs Charlie Flanagan has raised the issue of undocumented Irish and President's Donald Trump's controversial decisions with senior staff at the White House.

Speaking at the Irish Network AGM during his official visit to Washington the Portlaoise-based TD said he had a substantial meeting in the White House with the US National Security Adviser, General Michael Flynn, and his deputy, K. T. McFarland.

"In our discussion I sensitised General Flynn on our continuing concerns in regard to the undocumented Irish community and our hope that this can be addressed by the new Administration and Congress," said Minister Flanagan.

He also raised the controversial orders which temporarily ban citizens of seven predominantly Muslim countries from entering the United States.

"I directly conveyed to General Flynn the concern expressed in Ireland, and indeed, across the EU, at the most recent Executive Orders on immigration.   In response, General Flynn outlined the rationale for this order while I pointed out its damaging consequences in humanitarian terms, as well as for the international reputation of the United States," said the Mountmellick native.

The following is Minister Flanagan's full address to the Irish Network AGM:

It is a great pleasure to be here tonight at your AGM, and in particular to have the opportunity to say a few words to you at our Embassy.

I am delighted to be back in Washington, D. C., and I want firstly to pay a warm tribute to the work of the Irish Network DC as an energetic chapter of the nationwide Irish Network USA.  The success and growth of Irish Network USA has been extraordinary.  The connections it has created throughout all of the major cities of the United States has been deeply encouraging.

Your collective efforts helping to grow the economic, cultural, and social ties between the United States and Ireland is a real asset to us and I also know that you act as a place of welcome to new Irish and Irish American people moving to this city.

I am especially pleased that in recent years my department has provided funding to Irish Network USA in recognition of the important work that it does in promoting so many of the same objectives that are shared by the Embassy and our Consulates.  I would like to congratulate the new Board and wish your new co-chairs, Isobel Murray and Donald Tighe, the best of luck in the year ahead.

I need hardly mention that I am arriving here in Washington, D. C., as a new Administration and new Congress takes office.

Many of you, I know, work for international organizations like the World Bank, the IMF, or in one of the famous ‘think tanks’ that call this city home,  or in the media, on the Hill or on K Street, and are deeply connected with the political pulse of this city.  All of you will be watching with great interest, as we have been back home, as this new President and his Administration take office.

There has been much written and said about the different tone and style of this new administration but I want to emphasize here this evening that the unique relationship that exists between Ireland and the United States is as strong as ever.  Whether one looks at the economic, political, cultural, or any other manifestation of the relationship, one can see the real depth of the ties that bind our two nations together.

I would also broaden this out to include the entire Trans-Atlantic relationship between the European Union and the United States. No country played a more pivotal role in encouraging European integration than the United States from the very beginning of the ‘Coal and Steel community’ as Europe sought to rebuild itself after the Second World War. The EU – US relationship remains, in so many ways, the axis on which the world turns.

For over seventy years, this Atlantic relationship has helped lead a global response on shared challenges like dismantling trade barriers, engagement with the developing world, support of democracy and human rights and fighting terrorism.  I remain hopeful that this close relationship which has existed since the 1940s will continue, not least because it is in the best interests of both the United States and the European Union.

During my brief visit here to Washington, D. C., I will be meeting with senior members of Congress on both sides of the aisle, senior members of the new Administration, members of the business community, and the US media.  I hope in the course of these engagements to reiterate the emphasis that Ireland places on our relationship with the United States, reminding our contacts of the two way nature of the relationship.

As a good example, we are home to over 550 US companies, employing well over 100,000 people directly in Ireland; conversely tens of thousands of Americans are employed in the US in Irish owned companies.  We are not blind to the downside to globalisation, but as a small, open, export driven economy, we have seen first-hand the enormous benefits that the removal of trade barriers and reciprocal foreign direct investment can bring.

I will also be availing of my contacts with the new Administration and Congress to raise our own interests and concerns in regard to immigration reform.  The political context in Washington may have changed but the Irish Government’s objectives remain constant – achieve some relief for the undocumented and find some legislative pathway for legal immigration.  We can only advance those objectives if we engage and build relationships with the key decision makers in the Administration and that is what I will be doing over the next two days.

In fact, I have just come from a substantial meeting in the White House with the US National Security Adviser, General Michael Flynn, and his deputy, K. T. McFarland.  In our discussion I sensitised General Flynn on our continuing concerns in regard to the undocumented Irish community and our hope that this can be addressed by the new Administration and Congress.

In the long history of friendship between our two countries, we have always had the capacity, when needed, to speak frankly to each other.  At our earlier meeting, I directly conveyed to General Flynn the concern expressed in Ireland, and indeed, across the EU, at the most recent Executive Orders on immigration.   In response, General Flynn outlined the rationale for this order while I pointed out its damaging consequences in humanitarian terms, as well as for the international reputation of the United States.

As you are aware, we are currently in an election process in Northern Ireland with the unfortunate possibility of a period of political uncertainty in its aftermath.  I believe it is imperative that the power-sharing institutions in Belfast be re-established as quickly as possible after the elections on 2 March. In my meetings in Washington, I will be seeking the active encouragement of the US, in its traditional role as a key supporter of the peace process, to help make sure this happens.

Last year we marked the centenary of the Easter Rising and, most appropriately, this anniversary was marked throughout this country with over 300 separate events, many on a considerable scale.  I want to thank all of those who took part in the commemorations and particularly the Irish Network DC 2016 speaker series, which served to remind us of the historic role our diaspora here played in securing Irish freedom.  Your organisation and your presence here tonight underline the vital role ‘Irish America’ continues to play in sustaining positive links between our two countries.

Thank you all for your great work and I look forward to meeting with as many of you as possible here at the reception.