Laois schools gear up for Cycle Against Suicide 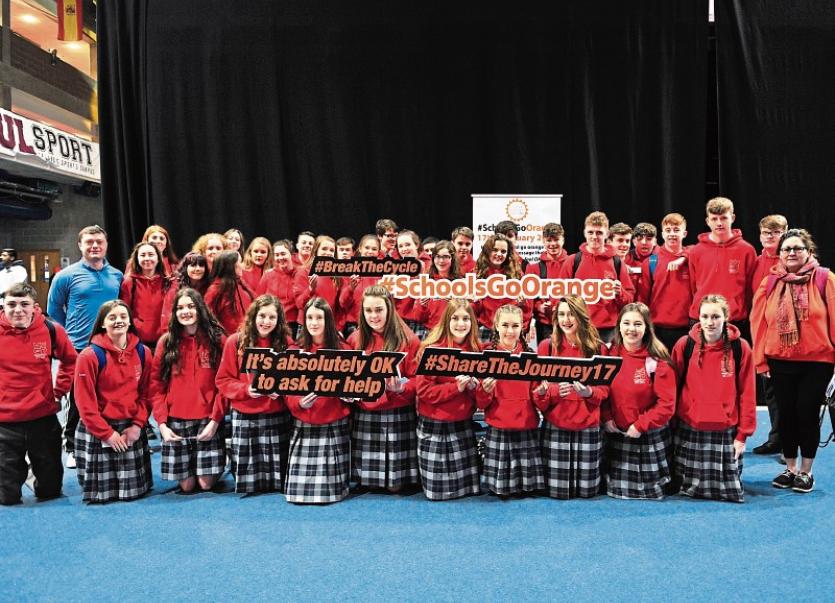 Laois teenagers are continuing to battle against the scourge that is suicide, by supporting the 2017 Cycle Against Suicide.

Students from Portlaoise College, St Mary's CBS and Coláiste Iosagain in Portarlington attended the biggest ever Cycle Against Suicide Student Leaders’ Congress in the University of Limerick recently.

They were among 6,000 Irish students at this years' congress, which is held to inspire and energise them to spread the message to get help when feeling low, through live entertainment, discussion and celebrity guests.

This year’s theme is “Share The Journey”, and every school undertook projects to promote positive mental health, to work towards the prestigious award of Cycle Against Suicide Ambassador School.

St Mary's CBS has held Amber Flags and Cycle against Suicide Ambassador School Status for the past three years. They sent 24 students with teacher Ms Fahy.

“Our project involved compiling stories from some of the wonderful people in our school both students and teachers. on achieving goals, overcoming adversity, trying something new and they all gave some advice,” she said.

The CBS Amber flag team then shared the stories in a booklet, on facebook and in school, while a video of interviews will soon be online.

This year they also plan to do a second skydive for the Donal Walsh Foundation, a slievnamon climb for Grow, a 'schools go orange' day and their mental health week.

Corey Kirwan is one of 50 Transition Year students from Coláiste Iosagáin who attended. The Port school also has an Amber Flag and is aiming for CAS Ambassador school status again this year.

“It was a very interesting day to hear about all the organisations that are out there to help people who need help,” he said.

“There was a great atmosphere especially when everybody was dancing together, a great feel good factor,” agreed Regan Lawlor.

“Attending this year’s Congress was massively worthwhile”, said Ms Cripps, a teacher at Portlaoise College. It was a really enjoyable day, but it also carried a very important message; that our mental health, just like our physical health, needs to be cared for,” she said.

The Congress focuses on the message ‘It’s OK not to feel OK; and it’s absolutely OK to ask for help’, to promote help-seeking behaviour in teens.

“We’re thrilled with reaction to our biggest Congress yet. Together, shoulder to shoulder, we can break the cycle of suicide on the island of Ireland,” said broadcaster and Cycle Against Suicide CEO, Colm Hayes.

The 2017 Cycle Against Suicide is a 14-day cycle around the island of Ireland, with cyclists supported by homes, schools, clubs and communities, from Sunday, April 23 to Saturday, May 6.