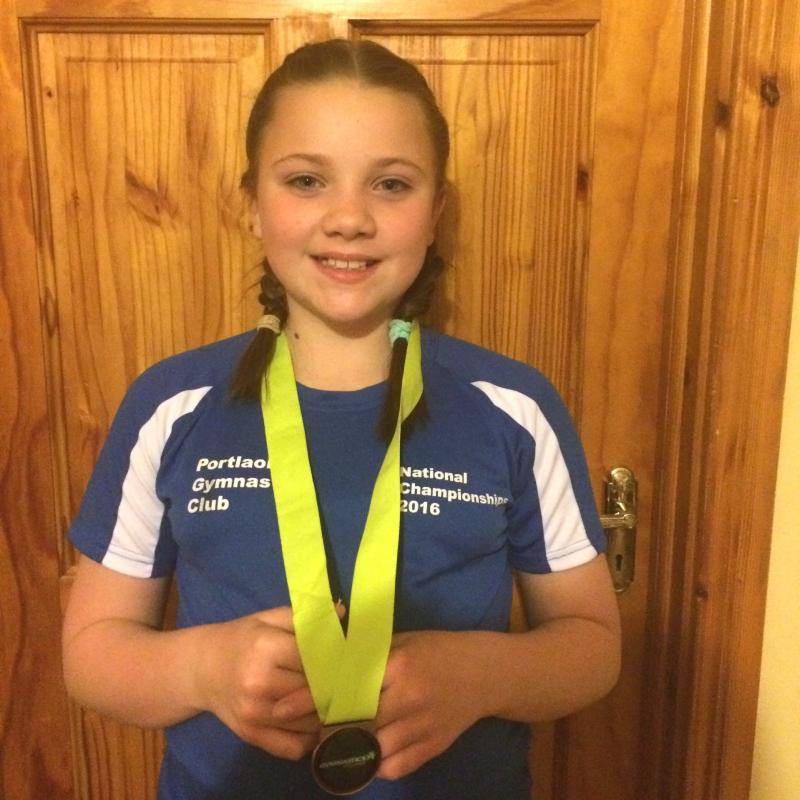 Niamh Doyle, 11, from Timahoe who has cystic fibrosis

Eleven year old Niamh Doyle is busy making her poster for a vigil in Portlaoise this Friday where she will join with other Cystic Fibrosis patients to plead for a potentially lifesaving drug to be purchased by the government.

A fifth class student at Timahoe NS, and keen gymnast at Portlaoise Gymnastics Club, Niamh has been fairly well so far, but when she hits adolescence her illness is predicted to worsen.

“I want to get Orkambi before I have to get a lung transplant. It’s an extra thing that could keep a lot of people alive,” she told the Leinster Express.

“When I am not well I’m not able to go to gymnastics because i feel really tired and sick. I hope the Minister buys Orkambi so i will have a better quality of life, and do more gymnastics because they are getting new equipment,” she said.

Niamh’s mother Adrienne said they were “in a bubble” up to recently because her daughter was coping so well.

“Only when she got sick before Christmas, and had to go into the CF ward St Michael’s in Crumlin, did I really get a fright. The other children that were a bit older than Niamh were really sick, some on food tubes, it was hugely upsetting. Then I realised the extent of the battle that other families were fighting to get Orkambi. CF can get worse during puberty, and every lung infection does increased damage, so we are trying to maintain what she has,” she said.

Niamh would be medically ideal for Orkambi once she turns 12 in six weeks, but so far negotiations between the government and Vertex, the American drug manufacturer, have been unsuccessful.

“They are putting money before life, it’s nearly a year down the line that they are assessing costs. Niamh’s two week stay in hospital cost €12,000, it was paid by our health insurance, but typical hospital stays for CF can be up to six months. How much is all that costing?” she said.

This Friday from 8pm to 9pm, simultaneous candlit vigils to plead for Orkambi will be held in almost every county in Ireland, with the Laois event to be held outside Laois County Council offices in Portlaoise.

Many from Timahoe National School will be there to support Niamh.

"Niamh has been promoting the vigil to all the classes for a number of weeks so I would expect a large Timahoe NS turnout. Her entries to the Intel Mini scientist for the last two years have centred on CF, and have been noted by a respiratory expert from St Vincent's hospital," said teacher Martina Mulhall.

Many other Laois CF patients and their families are expected to be at the vigil, and the community is also invited to come to support them.

“We will be remembering those who probably would be with us if we had the drug, and supporting those who still are fighting Cystic Fibrosis,” said Adrienne.