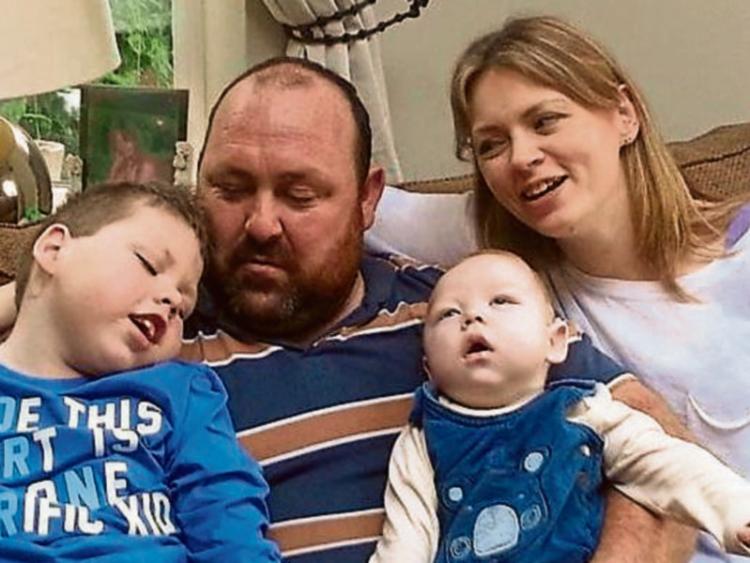 All hands are on deck for the next few months to finish the Ben and Jake Connolly Trust's special home in Mountmellick, but vital funds must yet be raised.

It is now almost three years since the Connolly family launched a public appeal to build a wheelchair accessible home for their boys Ben, then aged 5 and Jake aged 1, the only Irish sufferers of a rare debilitating condition, Allan Herndon Dudley Syndrome.

The family live in a cramped two storey townhouse with no room for equipment. Communities touched by their plight rallied to raise hundreds of thousands of euros to build the house, which will eventually be available to other families in similar circumstances..

Tragically a year ago little Jake lost his battle for life.

“It remains bitter sweet to see the progress because of losing Jake but I know he will be proud and want progress for his big brother. Ben thankfully has kept very well so far over the winter months which for such a disabled little boy is some achievement because a simple cold can cause severe breathing problems. His last hospital admission was July 2016,” said his mother Nicolette.

The progress on the house is “amazing” she said.

“It will make such a difference to Ben to not be isolated to one room in the house, to be able to be washed properly instead of bed baths, and for me to be able to lift him via hoist as I am unable to do this on my own and this restricts Ben’s movement.

The house can be ready by September, for Jake, parents Terence and Nicolette, and baby brother Billy to move to.

“We still need to raise up to €150,000 to complete it, June may be achievable, realistically the date will probably be nearer to September,” said Joe McEvoy, a trustee of the Ben & Jake Connolly Trust.

The house was made weather proof in late December, with the roof, windows and doors in place.

“Our aim is to have all of these services and electrics and heating done by Easter,” said trustee PJ Dempsey.

“Our sincere thanks to those who supplied goods at reduced rates and in some cases at cost, and for the many contractors who gave their time free on this project to get it to this stage,” he said.

They need tiles, timber floors, doors, kitchens and appliances, bathroom equipment, bedding and accessories, preferably by sponsorship or donations as funds will be used up by May.

Fundraisers include the Heritage 5k run in Killenard on Sunday March 5, a white collar kick boxing event in Mountmellick Sports Complex on Saturday March 18, and a Monster Auction in the complex on Easter Sunday April 16. See www.benandjakeconnollytrust.com