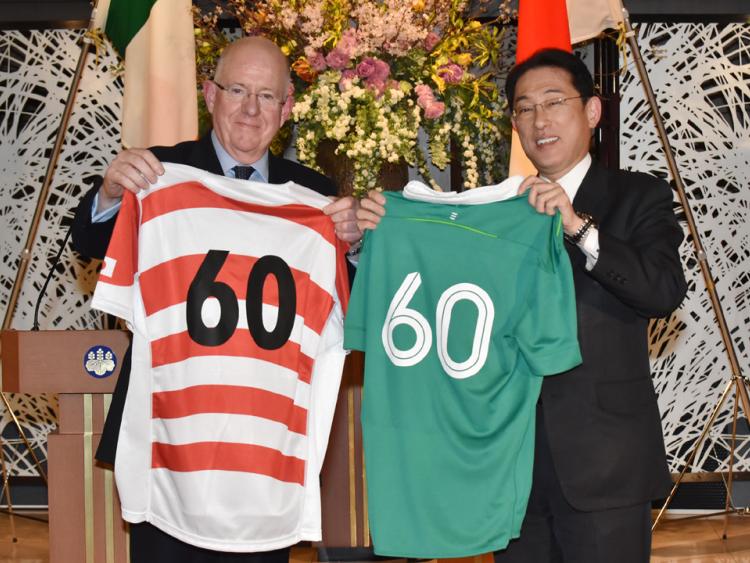 Laois TD The Minister for Foreign Affairs and Trade, Charles Flanagan TD, has completed an official visit to Japan  as part of the official celebrations of the 60th anniversary of diplomatic relations between Ireland and Japan.

Minister Flanagan commenced his visit with a trip to Hiroshima – site of the atomic bombing of 6 August 1945 – and paid his respects at the memorial to the 140,000 people who were killed in the horrific attack. The Minister met Ms. Yoshiko Kajimoto, one of the survivors of the bombing (known as Hibakusha in Japan).

The Minister then travelled on to Tokyo by shinkansen, or ‘bullet train’, where he held a series of meetings with Japanese business interests.

Ireland’s Ambassador to Japan, Ms. Anne Barrington, then hosted an event for the Minister and representatives from the financial services industry, where the minister spoke about Ireland’s unique offering in financial services, and the objectives of the IFS2020 strategy.

From there, it was on to the International House of Japan for an event in partnership with the Japan Institute of International Affairs, one of Asia’s most highly-respected think tanks, where the Minister delivered a lecture on many of the same themes to academics, the diplomatic corps and journalists.

The following day began with a meeting with the Ireland Japan Chamber of Commerce. Later that morning, the Minister travelled to the Japan National Press Club, and delivered a speech on the Irish commitment to the EU.

The Minister was then hosted by the Japan-Ireland Parliamentary Friendship League in the House of Representatives, where members of the League took the opportunity to explain their interest in Ireland and ask questions about recent domestic developments.

The day concluded with a working dinner hosted by Foreign Minister Kishida, in Iikura House. The ministers and their delegations discussed a wide range of issues relating. The two foreign ministers commenced the meeting with an exchange of rugby jerseys, which had 60 printed on the back, in light of the anniversary of diplomatic relations.

The Minister concluded his trip to Japan with a visit to Kyoto and Osaka, including an event for the Osaka branch of the Ireland Japan Chamber of Commerce and members of the Irish community.