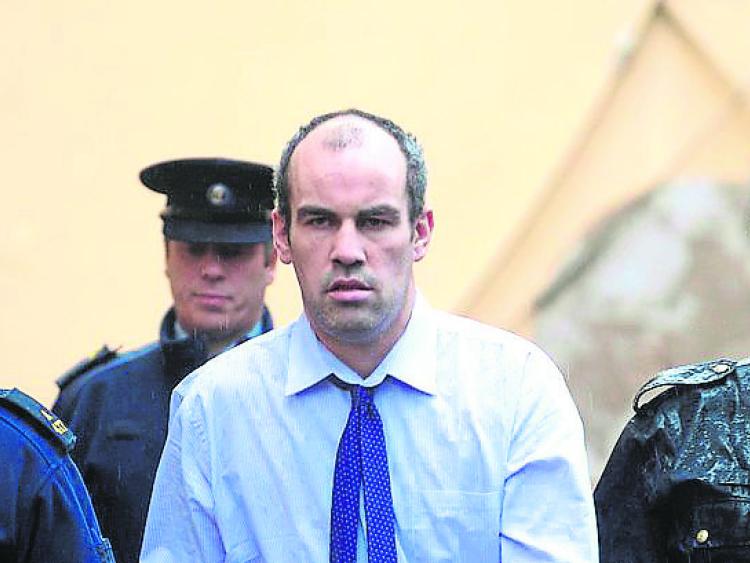 Michael Martin at Portlaoise court during his trial

A man jailed for falsely imprisoning an 11-year-old girl he "lifted" from a green area next to her home at Oldtown, Cullohill has had his 13 year jail term reduced to 11 on appeal.

Michael Martin (37), who was living at Shandon Court, Yellow Road, Waterford City when the incident occurred, had pleaded guilty to false imprisonment of the girl along the roadside near Oldtown, Cullohill on March 4, 2015.

He was sentenced at Portlaoise Circuit Criminal Court to 17 years imprisonment with the final four suspended by Judge Keenan Johnson on November 5, 2015.

Martin successfully appealed his sentence today/yesterday(Thursday) with the Court of Appeal holding that it was “excessive in all the circumstances”. He was accordingly resentenced to 14 years imprisonment with the final three suspended for five years.

Giving judgment in the three-judge court, Mr Justice Alan Mahon said three young children, all siblings, were playing on a green area next to their family home on the outskirts of a village in Co Laois when Martin arrived at the location in a silver Nissan vehicle.

Martin initially asked for directions before exiting the vehicle, approached one of the children - a girl aged 11 - physically picked her up off the ground and placed her feet first into the Nissan vehicle through the driver's door onto the passenger seat.

“The girl's quick thinking ten year old brother ran towards the vehicle and grabbed hold of the driver's door and attempted to open the door,” Mr Justice Mahon said.

Martin then proceeded to drive away “with the boy still holding the driver's door”.

While Martin's attention was distracted by the boy's “brave efforts to open the door”, his sister opened the passenger door and got out of the vehicle.

The children then ran home and told their father.

Eventually, the vehicle was tracked to Castlecomer, Co Kilkenny and Martin was arrested.

He admitted stealing the Nissan but denied any involvement in the offence initially.

He was identified as the driver of the vehicle at an identification parade but continued to deny involvement. His fingerprints were found in the car as well as fibres matching the girl's clothing.

He had been on bail at the time of the offence in respect of an earlier robbery.

A moving victim impact statement was provided to the sentencing court in which the victims father emphasised that his daughters innocence had been stolen, she had lost her confidence, his family's life had been permanently altered as a result of the offence and the victim was afraid to go anywhere on her own and was fearful of everyday things.

The sentencing judge picked 20 years as the headline tariff before mitigating it to 17. The judge had remarked that he would impose a life sentence on Martin to protect society but that measure was not available to him due to jurisprudence.

In total, Martin had 92 previous convictions including one for sexual assault (12 month sentence in 2000) and one for abducting a 14-year-old girl (four year sentence with two suspended in 2004).

In mitigation, he had pleaded guilty, he had difficult psychological background and had tendered a letter of apology.

Martin had poor education, problems with relationships, sexual and physical victimisation and mental health problems. “His general cognitive ability was assessed as being in the extremely low range of intellectual functioning”.

His barrister, Kevin White BL, submitted that the Circuit Court judge erred in imposing an overly punative sentence which amounted to "a form of preventative detention".

It was submitted by Mr White that the lack of violence was a factor which ought to assist Martin.

However, Mr Justice Mahon said the girl was subjected to violence . She was manhandled by Martin, lifted off the ground and roughly deposited in the vehicle through an open window. That was "real and terrifying violence by any measure albeit relatively short lived".

"To the extent that no greater violence was visited on the victim, only very limited mitigation should accrue," Mr Justice Mahon said.

Certain mitigating factors identified by Martin's lawyers - the absence of serious violence, sexual assault or use of a weapon and the shortness of the episode - "cannot truly be described as mitigating factors".

Mr Justice Mahon said the abduction of a child is an offence of the most grievous nature. It invoked an understandable sense of horror in most people, especially parents of young children.

“Certainly the bravery and quick thinking of the victims ten year old brother prevented what might otherwise have been a dramatically more serious event.”

It was “reasonable to assume” that without the boys intervention “the victim would have been removed to another location, for what purpose we cannot say, but certainly not for any legitimate reason,” Mr Justice Mahon said.

“The consequence for the victim could have been far more serious.”

Mr Justice Mahon, who sat with Mr Justice George Birmingham and Mr Justice Garrett Sheehan, said the court was satisfied that the sentence of 17 years was excessive in all the circumstances.

Martin was resentenced to 14 years imprisonment with the final three suspended.

Such a sentence reflected the gravity of the crime and provided for the protection of children from Martin for a considerable period of time. It was hoped he would rehabilitate himself to the a point where the risk of reoffending was minimal, Mr Justice Mahon said.

Furthermore, the sentence would act as a deterrent to others.

Martin was required to enter into a good behaviour bond for a period for five years post release.

As the conditions of the bond were being read to Martin he said: “I'm not going back to prison. I'll do everything the court asks me”.

He undertook to be so bound.

Mr Fennelly said it was a serious case and there were “red flags” in Martin's prior record and in a psychological report.

It was a case of a very young child being lifted from a green area next to her hall door. He said the court had to have regard to the vulnerability of young children in cases such as that.

Mr Fennelly said Martin had a “very bad record” and was as culpabable for the crime as anybody else would have been having regard to what the court heard was “intellectual challenges”.

He said a letter of apology on the day of the trial might not be as mitigating as other forms of remorse might be.