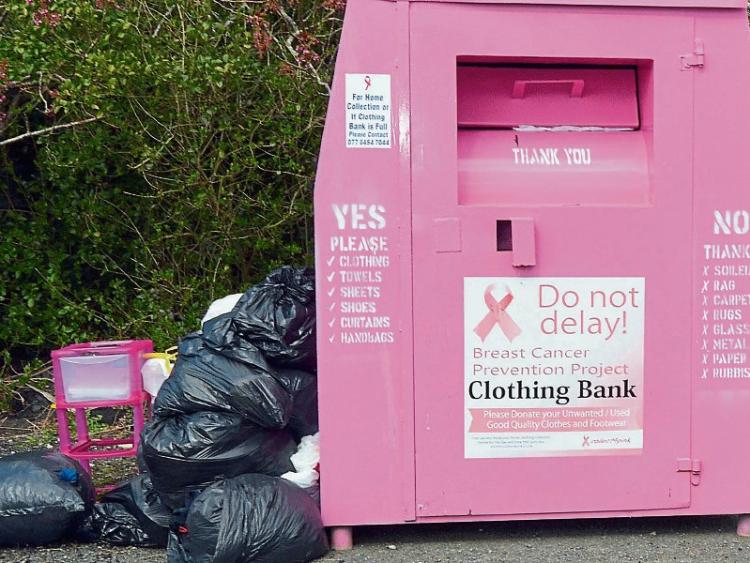 Clothes banks parked illegally in Laois beside bottle banks, could be confiscated by the local authority.

Removing the banks to recycle them as scrap metal, was one radical suggestion in the war against dumping heard at the February council meeting.

“Clothes banks seem to be parked illegally, is that not classed as dumping? It’s unreal what we have to deal with, we can’t expect our environment section to deal with that,” said Cllr Ben Brennan.

“These smartasses are dropping clothes banks beside our bottle banks. We should load them up and bring them away to be recycled, confiscate them,” suggested Cllr John Moran.

Chief Executive John Mulholland said that clothes banks are “clearly a case of dumping, it is illegal no doubt”.

Describing dumping as “acts of environmental vandalism against the people of Laois”, the chief announced a special meeting with all 19 councillors this month to find solutions.

“We will come back with a considered position on what actions we can take, and see if there is anything different we can do,” Mr Mulholland said.

“Despite a great effort from the environment staff, we’ve lost the war on litter, I don’t think there are sufficient funds made available,” said Cllr James Kelly.

“The only way of stopping it is if people are caught, named and shamed. People are fearful of that,” said Cllr John King.

“If industrialists decide to visit the Laois countryside, instead of buds growing on the trees, they will find bags of rubbish growing under them. Instead of a carrot, use an aul stick now,” said Cllr Jerry Lodge.

Private contractors are be hired by Laois County Council to do a county wide clean-up.

“We are seeking tenders for litter blackspots, to clear the big amounts of litter. However collections...shouldn’t be considered a solution. There must be a firm deterrent,” said the council chief, noting that it is free to leave electric items to landfill.

Cllr Paschal McEvoy urged people to give clothes to charity shops instead of clothes banks.

Meanwhile 25 out of the 46 recycling banks in Laois are being replaced with ‘simply gorgeous’ new models, according to Laois County Council’s environment section, which expects more people to make use of the new banks.

The remaining sites at less busy locations will be phased in over the next two years subject to resources.