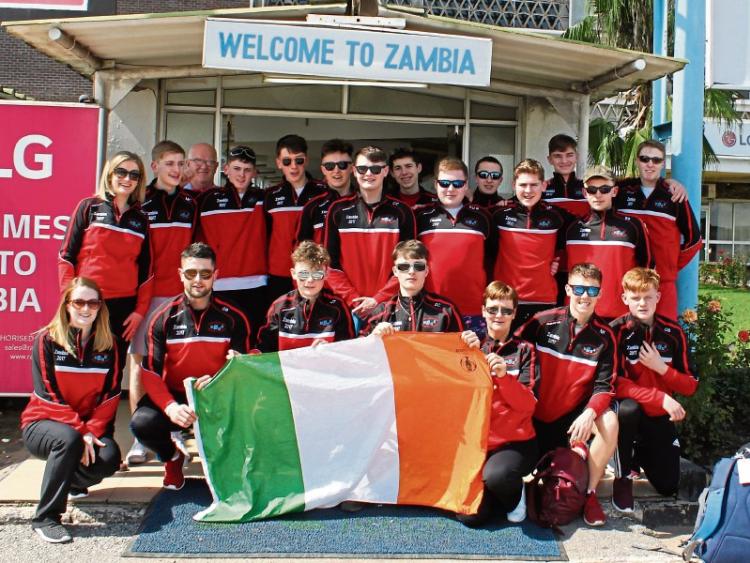 Read some extract from the diaries they wrote of their adventure, from when they left on Saturday February 11 to their return a fortnight later.

It all started on the 11th of February after nearly a year of constant work the day had finally arrived. We all gathered in the school for one final goodbye to all the friends and family who had been helping us all along.

We decided to leave while everyone was still smiling. At Dublin airport the sense we were actually leaving for Zambia kicked in, however the eight-hour flight to Ethiopia gave us plenty of time to settle down. The journey was definitely not one of the highlights of the trip as we then had a three-hour layover in Ethiopia before disembarking on another eight hour flight. Landing in Zambia even through our jet lag and lack of sleep was still an amazing experience.

When we arrived in Lusaka airport we drove to Lusaka backpackers in the city.We were thrilled to see there was a pool, and left our luggage in our rooms and then decided to jump right in. We spent a good hour in the pool that evening, messing around with the ball in the pool and enjoying the hot sun. when it began to get dark, we went and got changed before ordering our dinner from the bar.

We had a great time eating our dinners by the pool, laughing and joking about all that went on that day. After that, we played a few games of pool and went off to bed. It was hard to sleep that night, we were too excited about the days to come.

After an interesting night In the Lusaka Back Packers, where PJ Daly my roommate, was bitten alive by the mosquitos.

We got all our bags onto a small bus and some of us had to go to the bus station first, while the others checked out of our place of accommodation.

A bus with no driver was rolling towards us. Having survived that we proceeded to wait for three hours, until our bus came.

We met some very friendly Zambians and some not so friendly. Eventually we started our eight hour bus journey. The journey was long but we got to see Zambia’s remarkable countryside.

When we got there, we went straight to our accommodation, Fawlty Towers. There we relaxed and then we went to bed around 11.

Today was our first day in the primary schools.

Neil Keane and myself were based Lubuyu where we were teaching grade 7 which would be the equivalent of 6 th class here.

All they wanted was for us to correct their copies and to give them stickers. After lunch it was our first day going to Lubasi Home for orphans. That was an eye-opening experience. The welcome we got was phenomenal, a song I’ll never forget. Then it was Zambia vs. Ireland in an intense soccer match. It was a close affair but the heat got to the pale-skinned Irish and the Zambians slotted a few home.

Today was my first day to teach in Ngwenya Primary school. We arrived at 8am. I was shocked at first. There were over 60 students. I couldn't believe I was going to be teaching this many.

The school was so clean, and kept well. We taught the students Maths, which was painful. Explaining maths is hard enough, explaining it to kids with little English is even harder. After break, we did PE. It was great craic. They showed us their dances, games and sang songs. It was brilliant. We finished up at around 12:30. It was a long school day but it was a great experience.

On Friday, we had the school sports day at Ngwenya Primary school. We walked to a field where an athletics track had been drawn into the dirt. The students sang the national anthem. They then divided themselves into teams. They started racing in the 20-30 degree heat. They all did an 1500m, a 800m and a 100m. They pushed themselves really hard and enjoyed it a lot. It was great to see.

That evening, we went down to the Zambezi river for the day’s reflection. The theme was people we’ve met so far that influenced us. I talked about Laston, a lad in my class. He was always so eager to learn and have fun. We watched the sunset and looked at the monkeys in the trees above us.

The team travelled to the countryside outside Livingstone to a dairy farm belonging to old friends of Ms Carroll, Neville & Maureen.

Maureen had made us cake and buns. They had built houses for their workers families to stay on the farm. The trip really added to our immersion as it showed us how people live and operate a business in Zambia.

They produced dairy products and cheeses to sell. They pay 16 workers and house all of their families. We met some rich and very poor people, the most important part of the project.

Our final day of teaching in Zambia. The two weeks really flew by and there was a lot of nostalgia as we all piled onto Patrick's bus going to our schools for the final time.

We followed the usual route with Ngwenya school first and Lubuyu after.

Our last day was much more relaxed than our usual teaching regime. We did some classwork in the morning and then brought the children outside after break. It was incredible to see how enthusiastic all the kids were,

They taught us some of their games which involved a lot of chanting, singing, dancing and movement.

As we left we were emotional, the kids all crowded around to wish us goodbye.

We made a quick stop to the market in Livingstone to pick up presents for home, the markets were unlike anything we had seen in Ireland with the traders willing to trade anything so long as a few kwacha were thrown in!

The final part of our day was by far the toughest as we paid our last visit to the orphanage.

We gave them Cul Camps jerseys donated by Laois GAA County Board which the children all absolutely adored.

We played an Ireland v Zambia soccer match before saying a very emotional goodbye . As we left the girls in the orphanage sang to us.

Almost all of us were shedding a tear as we left. It just felt so unfair to leave the children while we headed back to the luxurious lives we live in Ireland.

As it was our last evening we took all the people who had helped us out to dinner, including Sister Mary, Neville and Brother Mick. A perfect end to an amazing trip.

After an eventful last night at Fawlty Towers, we departed at 3am from Livingstone, bound for Lusaka. It was difficult, saying our final farewells to a place we'd grown to love so much, a place wherein so many unforgettable memories were made and so many incredible experiences and emotions felt.

We arrived after eight gruelling hours on the road, in Lusaka at around 1pm, and checked back into the “luxurious” Lusaka Back Packers.

Bill and I belted out a few tunes on the banjo and guitar as the sun began to slowly dip below the horizon It was an eventful time, one I'll surely never forget. Let's just say I fully immersed myself.