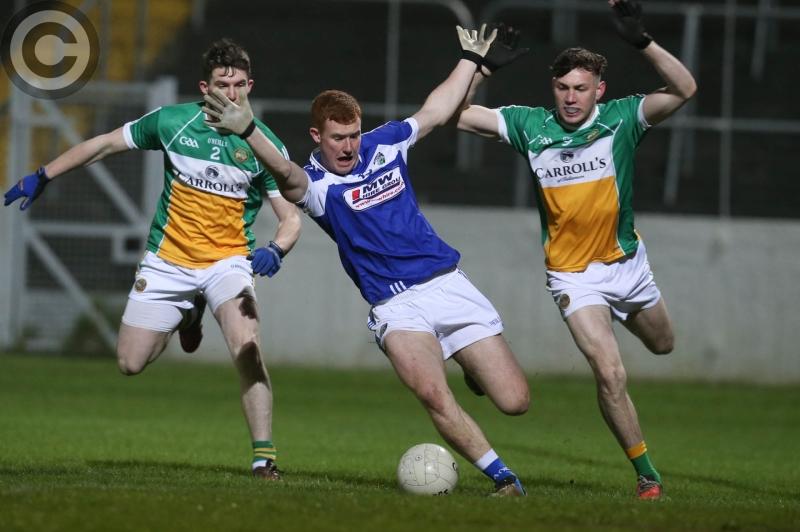 Colm Murphy on the attack for Laois against Offaly. Pic: Alf Harvey/HRPhoto.ie

Laois U-21 footballers hopes of becoming the first team from the county to contest a Leinster U-21 final since 2009 were dashed on Wednesday night.

After a bright start, they were eventually reeled in by Offaly, who made them pay for some poor shooting by claiming a one point win. Offaly lead by as much as seven points at one stage in the second half before Laois launched a late comeback, but it was too late to get a result from the game.

The first half started slowly, with Sean Moore getting the only score of the opening stages when he pointed a fourteen yard free. The next score didn't come until the ninth minute, when Moore swung over another free, but poor shooting was the order of the day after that.

Laois were particularly guilty, as they racked up seven wides in a little over fifteen minutes. When they did finally get another score, in the 18th minute, it was worth the wait. Sean Moore's shot for a point bounced back off the post, and Eoin Buggie was on hand to pick up the rebound.

He fed it to an unmarked Colm Murphy, and he bundled home from close range.

Offaly were offering little in attack at this stage, but finally sprung to life a minute later when Ciarán Farrell fired home a goal from six yards out.

They then went on a run of four points in a row, as Farrell, Paddy Dunican, Shane Tierney and Jordan Hayes (free) all hit the target to push them two ahead, 1-4 to 1-2.

Another Sean Moore free settled Laois, but Paddy Dunican kicked an incredible point from the left wing for Offaly to see them lead 1-5 to 1-3 at the interval.

Offaly had finished the first half the stronger of the two teams, and they carried that form into the second period as well. Jack Walsh pointed from a tight angle before wing-back Adam Mahon surged forward to score a brilliant goal, off the underside of the crossbar.

Jordan Hayes and Shane Tierney stretched the Offaly lead to seven, 2-8 to 1-4, before Laois finally mounted a late challenge. Sean Moore landed a free before Colm Murphy was fouled for penalty, and Moore calmly slotted it home.

Tom Shiel then reduced the gap to two with a brilliant point, before another Moore free left one in it as the game headed into injury time.

Shane Tierney got another poitn for Offaly from a free, but Laois had one last chance for a goal when they were awarded a 14 yard free. Tom Shiel tried to power it to the net, but it was saved on the line, and Colm Murphy's point from the rebound wasn't enough.