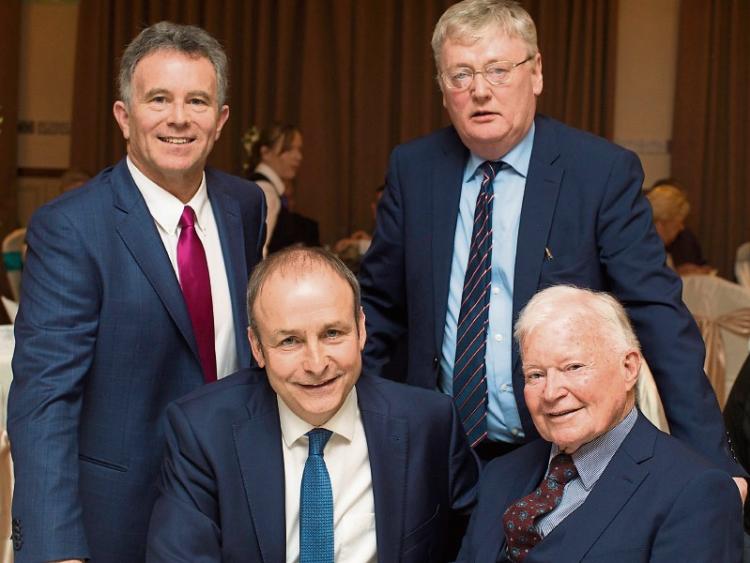 iFianna Fáil is targeting a second seat in Laois on the back of its big vote in 2016 when it topped the polled with just one candidate.

That was the message delivered by Micheál Martin when he addressed the Laois Fianna Fail dinner dance in the Castle Arms Durrow.

The Fianna Fáil leader noted Sean Fleming's "extraordinary vote" in the 2016 general election which was 35 per cent of the vote.

"That creates the platform for us to go after the second seat in the next election," he stated.

"The target now is that."

"I have asked all members of our parliamentary to look in their own constituencies and see how they can add seats, so that we have a critical mass of seats and can take government next time around.

"We need to go to into government with sufficient strength and capacity to be decisive in government, something the current government is not.

"It is drifting and lacking direction in some key policy areas, such as health, housing and Brexit.

"Fine Gael is beset by internal angst, because of their leadership and other issues. They were annoyed after the general election, and annoyed with the idea we were facilitating a minority led government.

"They have not settled down and that is having an impact."

Deputy Martin paid tribute to the party organisation and councillors.

The 2014 local elections were the first major springboard in the party's comeback, he noted.

"We emerged as the largest party in local government in the country. But we did not get everything right in those local elections.

“We got things wrong, such as some of our selection choices. We could have done better if we were wiser. Hindsight is a great virtue and we will learn from it," he added.

Deputy Martin also spoke of the challenge of Brexit.

“The British government had no plan of what to do afterwards. There is no clear coherent message coming from them. The implications are now very severe,” he stated.

“This is the single greatest challenge to face this county in years. It is a generational issue that completely changes the economic model we have experienced for the last 50 years since we joined the EU.

“The UK government are completely chaotic. It is very worrying if we end up with tariffs and they are outside the customs union.

“It has severe implications for our agricultural industry, food and our Irish owned companies in the regions and rural Ireland.

“In the regions outside Dublin the impact will be most acute. The agri food industry needs particular attention. The situation is extremely fraught and this is the calm before the storm,” he warned.