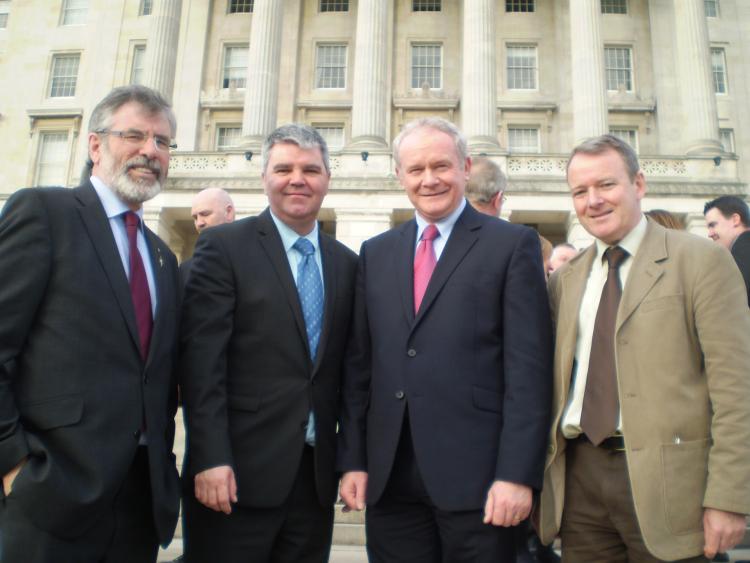 The Portlaoise-based TD said he worked with the former Northern Deputy First Minister and got to see first hand the part the type of person he was and the contribution he made.

"He is a loss to Sinn Féin and to Ireland. He had an outstanding personality. He was a very charasmatic, honest and intelligent man. I knew him since the mid-1980s and served with him at differant levels internally including on the SF Ard Comhairle," he said.

Dep Stanley said they canvassed together in Laois during his first first successful local election campaign in Laois. Dep Stanley canvassed with him in Mid-Ulster Westminister constituency election and the Irish Presidential election.

"He was a man of great integrity whether you are for him or against him. Opponents recognised that he was a man of his word," he said.

Dep Stanley said his colleague played a key role in the movement away from violence.

"In the late 1980s we put together a strategy that was an alternative to violence. When that process started he was one of the architects of Towards a Lasting Peace.

"What that was about was saying to the British and Irish states and the IRA and everybody else was that there is a way of bringing about a settlement. It took a number of years but he would have been one of the main drivers," he said.

He said Martin McGuinness was one of the key people in bringing Republicans on the road away from violence.

"Those who would have been involved in the conflict said the he led from the front during war. I would say lead from the front in peace and reconciliation and reaching out to people. He understood that each side had caused hurt," he said.

"Privately, he would have said to me that Republicans have to move first to show sincerity and make it easier for the other side to meet us half way," he said.

Dep Stanley recalled that while McGuinness worked on moving Republicans away from violence in the 1980s he was also working on the political project.

"Sinn Féin was a tiny organisation in parts of the country and didn't exist in other parts. He understood in a simple clear headed way that if you wanted to bring about transformation on the island then you need a political organisation to do that.

"It always stuck in my mind what he said at an internal meeting in the mid-1980s. He said the front line is where you live and whether that is in West Cork, West Belfast or in the Midlands that is where we have to build politically to bring about peaceful change. He put a huge emphasis on developing Sinn Féin as a 32 county organisation," he said.

On a personal level Dep Stanley said the Mr McGuinness was an impressive man but modest.

"I never saw any sign of arrogance or domineering approach in him. He would argue his point very strongly but could bring people with him because he had great integrity.

"I thnk there an awful lot of people would not have been brought along the road to peace without Martin McGuinness. He was 'the' person in terms of convincing people of the way forward," he said.

Dep Stanley said he faced dissident Republicans down in the face of threats to himself and his home.

"He made clear that he was prepared to take risks and not be diverted from the work of reconciliation," said Dep Stanley.

In relation to his colleagues time in the Provisional IRA Dep Stanley said Martin McGuiness believed war was brought to his streets.

"The first people to be killed on Martin McGuinness's street were by members of the British armed forces. His neighbourhood and city was invaded by B-Specials an armed paramilitary police force like the Black and Tans.

"It is regrettable that was the course of history but when he saw the opportunity to seize peace, after the hunger strikes in particular when there was an opportunity to pursue political means, he embraced that," he said.

Dep Stanley said that, as with his role in peace, Mr McGuinness was at the front line in war.

"He was an IRA leader. People who were involved with him said he would have led from the front. He was fearless on active service in gun battles and so on," he said.

The Laois TD said the move away from this violence did not see Mr McGuiness change rather the conditions in the North changed starting with the Anglo Irish Agreement and electoral success for Sinn Féin.

"The challenge was, and he always said this, was that if we want people to follow a peaceful political path we have to provide a political alternative that will work," he said.

Dep Stanley said it was Martin McGuinness that first encouraged him on a road that has led to Sinn Féin having a Laois TD.

"He said to me that we need to take seats in Leinster House here (in Laois). I was not elected at the time and had no intention of running for election.

"But he saw that this was achievable and the need for Sinn Féin to be on councils and in the Dáil. He was looking further ahead than some of us and could see that it could be done," he said.