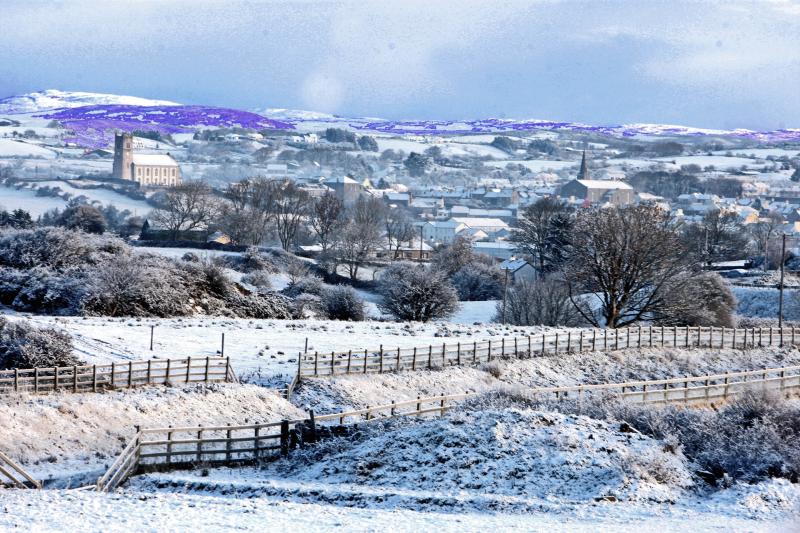 A very cold today which began snow will be followed by a bitterly cold night with more snow in Met Éireann's weather forecast.

The prediction for Tuesday night is for temperatures to drop below freezing hitting minus 4 degrees in places. It will be a near calm night but the severe frost and icy stretches will quickly develop, along with dense freezing fog in parts too.

While it will become dry in many areas, there will be further well scattered wintry showers too, with locally light accumulations. There is also the risk of more persistent rain moving up along the east and southeast coast later, possibly turning to sleet or snow here, especially on higher ground towards morning.

It will be very cold Wednesday with frost and ice clearing gradually - a light dusting of lying snow locally. Spells of sunshine and well scattered showers for many areas, mainly of rain or hail, in rather brisk northerly winds.

Eastern counties will however be mostly cloudy, with persistent falls of rain, especially along the coast, possibly turning to sleet or snow at times. Again much colder than normal with an added wind chill; maximum temperatures of only 6 to 8 Celsius.

Wednesday night is also forecast very cold and windy, with clear spells, mainly in the western half of the country and just scattered showers here, most of them in western and northern coastal areas, some wintry.

Eastern areas will have more persistent outbreaks of rain and sleet, with a risk of snow, especially over high ground. Minimum temperatures 0 to 4 Celsius, in a moderate to fresh northerly wind.

Thursday will continue very cold, in moderate northeasterly winds, fresh along eastern and southern coasts. Many areas will have sunny spells, especially the western half of the country, but there will be some scattered showers also, some of hail, with a risk of a few wintry showers.

Eastern areas will be mostly cloudy at first, with rain and sleet early on and a slight risk of snow, but it will brighten up during the day, with sunny spells developing and just a few scattered showers. Maximum temperatures 7 to 9 Celsius.
Thursday night will be mostly dry, but very cold, with frost in many areas. However, temperatures should remain above freezing on eastern and southern coasts in a moderate to fresh northeast wind.

It is expected to be mostly dry on Friday, with sunny spells, but cloudy along western and northern coasts, with a slight chance of a few spots of light rain or drizzle. Becoming milder, with maximum temperatures of 9 to 12 degrees by the end of the day. However, there is a risk of frost again on Friday night.

Weekend and next week: Mild. Mostly dry and settled weather over the weekend, with sunny spells, likely to continue for much of next week.