The stately homes of Laois have a fascinating history 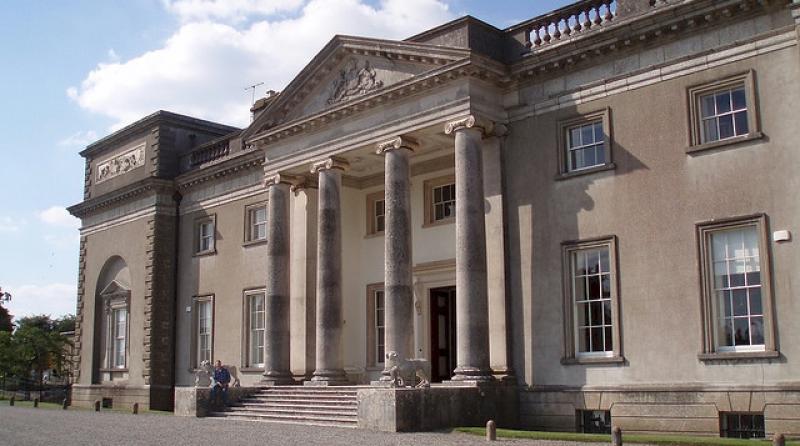 We are lucky to have some of the finest historical houses in Ireland right here on our doorstep in County Laois.  These stately homes are wonderful examples of the rich architectural heritage in Laois and the good news is that you can visit most of them..... 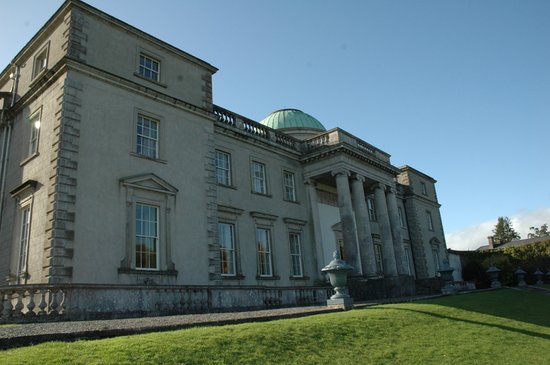 The large neo-classical mansion of Emo Court is arguably one of Laois’ most famous buildings.

It was designed by the famed Georgian architect, James Gandon in 1790 for John Dawson, the first Earl of Portarlington. It was built in the style of the Custom House in Dublin also designed by Gandon. Construction began in 1790.

Emo is one of the few houses to have been designed by Gandon, others include Roslyn Park, Sandymount and Abbeville, Charles Haughey’s former home in Kinsealy.

Gandon was also responsible for the nearby Coolbanagher Church, the only ecclesiastical structure he was associated with.

Emo Court had many owners throughout its history. It ceased to be the Irish residence of Lord Portarlington in 1915. In 1929, it, along with about 60 acres of the demesne, was taken over by the Jesuit Order.

The Jesuits spent years here, until they sold the property to Major Chomeley-Harrison, a London stockbroker by profession. He spent years and huge resources restoring the property, under the supervision of Sir Albert Richardson and Partners of London. The gardens and lake at Emo were also restored.

Major Chomeley-Harrison presented the entire property to the State in 1994, with President Mary Robinson in attendance at Emo for the occasion. The only proviso he sought was that he could reside there until his death.

Emo Court is now managed by the Office of Public Works and is open to visitors.

Access to the house is by guided tour only, and these are available hourly.

For further information, check out the following link: 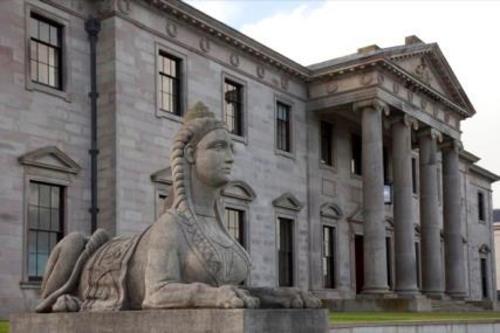 Nowadays an internationally famous exclusive hotel, Ballyfin’s rich history saw it as a home to the O’Mores, the Crosbys, the Poles, the Wellesley-Poles and the Cootes.

The house was built in the 1820s for Sir Charles Coote, and designed by the well known architects Sir Richard and William Morrison.

The Cootes spent a century in the house, their reign coming to an end in the turbulent 1920s. In 1928 Ballyfin was sold by Sir Ralph Coote to the Patrician Brothers, and it became Patrician College Ballyfin, a school which attracted pupils not only from Laois, but from all over the country.

The Patricians sold the house in 2002 to Chicago businessman, Fred Krehbiel. Mr Krehbiel spent $50 million on its restoration and renovation.

Ballyfin House opened in 2011 after eight years of restoration work, longer that it took for the house to be built in the 1800s.

Among the many fine features of the property are its mile lone meandering driveway, its private lake, and huge porticoed entrance.

Its many famous features also include the Whispering Room, where two people standing in opposite corners can hear each other's whispers thanks to the curved construction of the ceiling.

Ballyfin House has played host to a variety of celebrities, including most famously Kim Kardashian and Kanye West, and also the likes of JK Rowling and Richard E. Grant.

It's open to guests, and an overnight stay will cost you.

For further information, check out the following link: 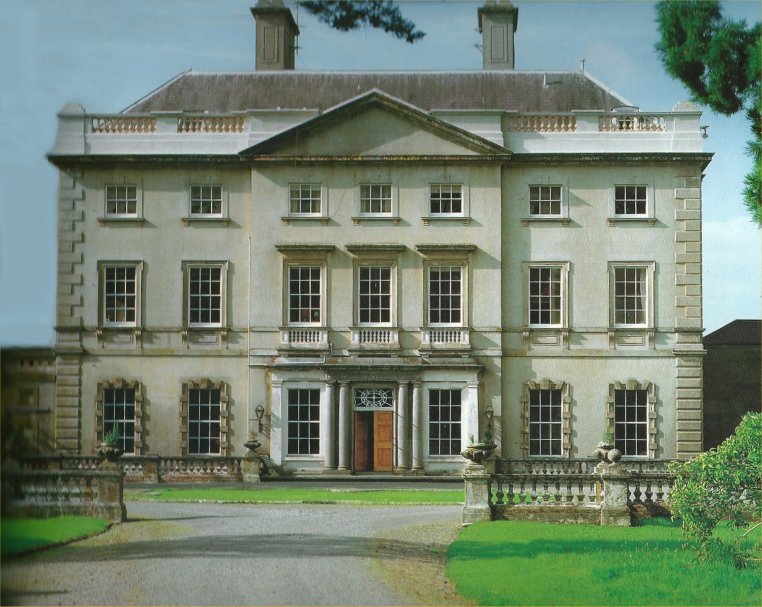 Abbeyleix House is one of Ireland's undisputed great houses.

It has been intertwined with the town of Abbeyleix since the town's early settlement by Cistercian monks in the 12th century.

The town was subsequently acquired by the De Vesci family, who commissioned the architect James Wyatt  to design the mansion, the centrepiece of their estate.

Abbeyleix House was home to the De Vesci family for almost three centuries until it was sold in 1994 to Welsh businessman, Sir David Davies. Sir David is President of the Irish Georgian Society and President of Wexford Festival Opera.

He embarked on a comprehensive restoration project, which took five years.

The Davies family took up residence at Christmas in 1999. Along with Ballyfin it was was one of the great houses to have been restored in the late 20th and early 21st centuries.

Abbeyleix House is a private family home, not open to the public.

For further information on the House and town of Abbeyleix, see the following link: 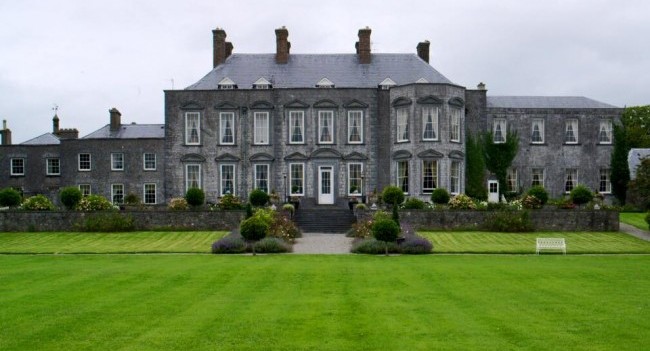 Castle Durrow is one of the country's best known hotels.

However, it enjoys a rich history amongst the pantheon of fine Irish country houses.

It was originally built as a family home by Colonel William Flower, between 1712 and 1716.

William's son Henry received the title of first Viscount Ashbrook in 1951, a peerage which still exists to this day.

The Flower family owned the estate until 1922, at which time they sold up and returned to England.

The Land Commission eventually took over the arable section of the estate.

The house lay vacant for a number of years until it transformed, in 1929, into a school - St. Fintan's College and Convent.

In 1998, it was purchased by Peter and Shelley Stokes who began the gargantuan task of transforming it into what is now Castle Durrow Country House Hotel.

The property is also renowned for its gardens, and walled garden, the origins of which date back to the Flower family. It has 50-acres of lawns, parkland and forest.

The Stokes' began the work of rejuvenating the garden when they bought the property. They stress that the gardens remain a work in progress but the work to date has been extremely impressive resulting in a mature and beautiful garden, creating splendid grounds to set off the Castle. 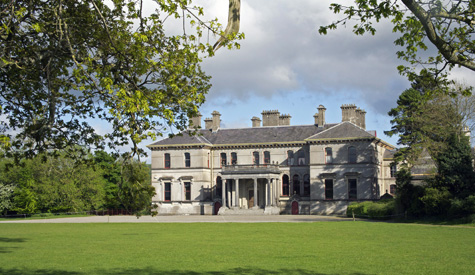 One of the best known houses in the country, thanks to its latter day incarnation as host of the Electric Picnic, Stradbally Hall has been the seat of the Cosby family since the reign of Edward VI.

Almost uniquely in the history of Irish country houses, the Cosby family still resides here and, with the exception of a certain weekend in September, it is a private residence.

The house dates from the middle of the 19th century and is an enlargement in classical style of a Georgian house, which had been built in 1772, to replace a yet older residence.

The north front, with its massive pillared entrance faces a broad stretch of parkland. The south front, of which the most remarkable feature is a lofty pillared pavilion, overlooks the terraces and gardens.

Major Ashworth Cosby served in the first and second world wars with the Rifle Brigade, and was Joint Master of the Queen's County Hounds from 1933 until 1938.

He died in 1984 and passed the estate to his eldest son, Adrian. Adrian farmed the estate before passing it to his son, Thomas.

This article is sponsored by AOCA Engineering Consultants. Check out their website at http://aoca.ie/