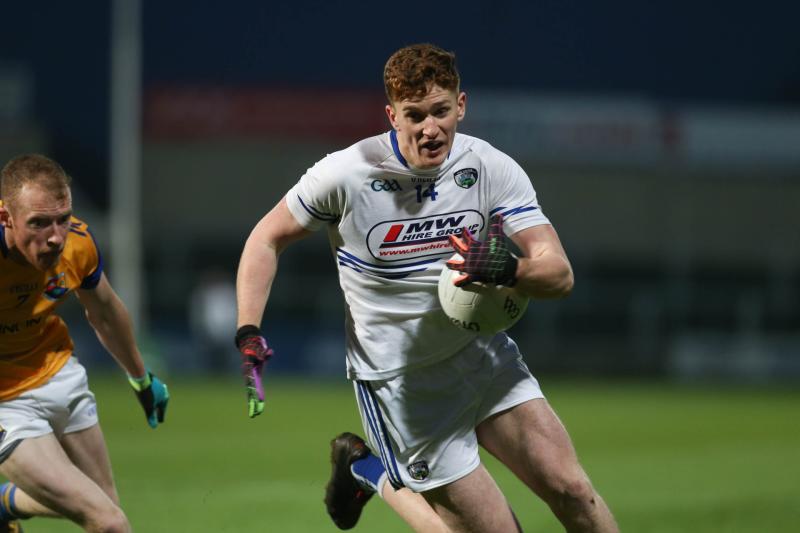 Evan O'Carroll on the attack for Laois. Pic: Alf Harvey/HRPhoto.ie

Laois, mired in relegation trouble, needed to win to have any hope of avoiding a second straight relegation, and they duly claimed a three-point victory. Kingston kicked nine points on the night, six of them in the second half, a feat all the more remarkable considering he wasn't even listed on the match programme, as he passed a late fitness test to start.

Longford, with wind advantage, got off to a bright start, as Mickey Quinn and Larry Moran both hit the target within three minutes of throw in. Laois took their time to settle, but it was that man Donie Kingston who brought them back into it.

He played a quick one-two from a free with David Conway to point from close range, before a brilliant, bustling run down the left wing saw him hold off a number of Longford challengers before squeezing a shot between the posts from a narrow angle.

Evan O'Carroll then put the home side in the lead for the first time, but Robbie Smyth quickly restored parity. Sean McCormack followed that with a free, and that was to be the pattern of the game for the first half, with one side edging in front and the other quickly reeling them in.

Longford would go to the dressing rooms in front though, as they finished the half stronger. With the scores tied at 0-6 each, the exploited lax Laois defending to set Larry Moran up for a good point. Moran then turned provider to pick out Robbie Smyth, and his third point of the half left the visitors 0-8 to 0-6 in front at the break.

Laois needed a bright start to the second half and they got exactly that, with Kingston inevitably at the centre of it. He pointed four frees in the opening ten minutes of the half, winning three of them himself, as he caused havoc in the Longford defence.

Sean McCormack stemmed the tide with a free for Longford to leave one in it, 0-10 to 0-9, but Laois then struck for the game winning goal. Evan O'Carroll picked out the unmarked David Conway 30 yards out, and he took a solo before rifling to the net.

The last fifteen minutes were eventful, with O'Carroll sent off for Laois, and Longford getting within two, 1-12 to 0-13, as the game entered injury time. However, it was fitting that Donie Kingston would have the final say, as his free saw Laois over the line.