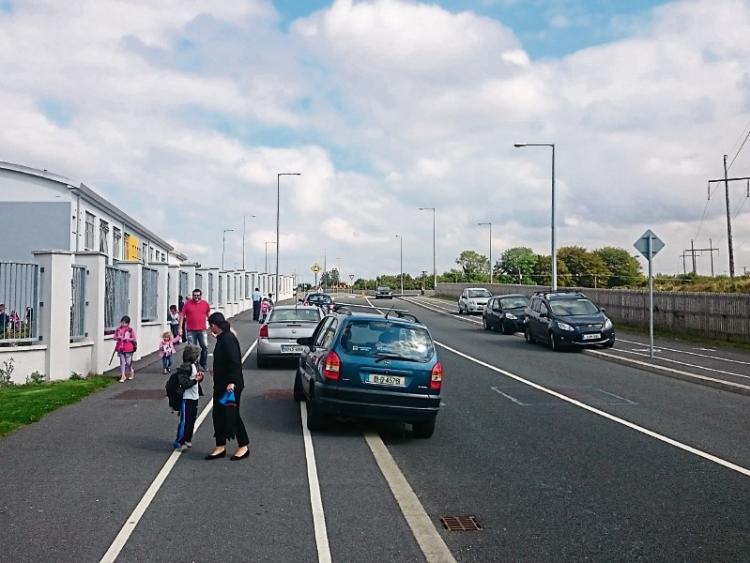 A few inconsiderate drivers are still parking up on the footpath at the Summerhill campus in Portlaoise, prompting local councillors to call for gardaí to patrol the area issuing on the spot fines.

Cllr Caroline Dwane Stanley proposed a motion, calling on Laois County Council to install extra traffic calming and safety measures in the vicinity of Gaelscoil, Educate Together, and Maryborough School.

She said she had received emails and photos showing cars parked on the footpath at the entrance to the school campus.

“It beggars belief,” she said, going on to say that you could go to any school in the county and see the same problem, such as on the Borris Road.

She said there were bollards on the footpath, but the gaps were so wide that cars could get through them. She went on to say that these motorists were showing no concern for prams or wheelchair users, and there were concerns if cars were going to mount a footpath where children were walking.

“I’d call on parents to have a bit of savvy,” she said.

Cllr Willie Aird said he would prefer to see extra railing on the footpath rather than a bollard.

“You can’t blame the local authority for people parking on footpaths,” he said.

Cllr Aird said there was a huge presence of gardaí in the town and it would be a great help if there were gardaí at the schools in the morning, even once a fortnight.

“Anybody guilty of parking dangerously, especially with children there, a €40 fine would soften their cough,” he said.

Director of services, Kieran Kehoe, said that a meeting will be arranged between representatives from the schools, Laois County Council’s road safety officer and area staff.

He said he had visited the school and the bulk of people are driving in accordance with the traffic laws, but there are still three cars choosing to drive up on the curb and park illegally.

“99% are in accordance with the design of the scheme,” he said.