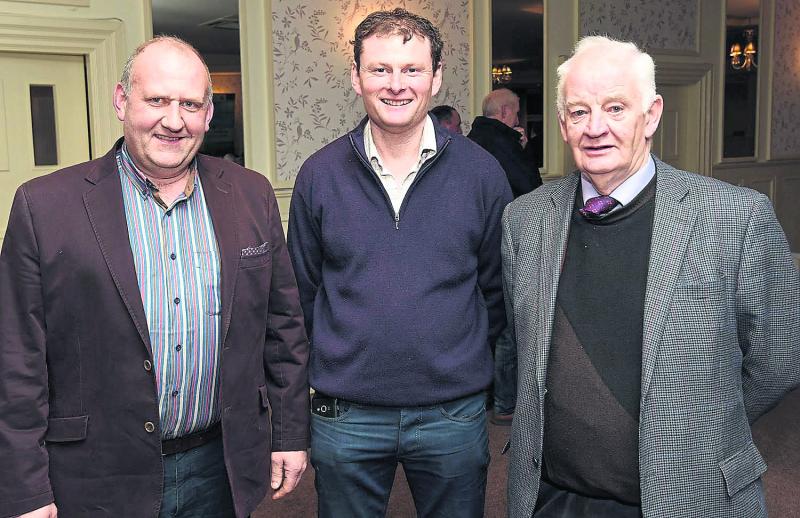 Pat Knowles, Liam Delaney and Jim Holland at the Laois IFA AGM. Jim Holland was one of the marchers in 1966

Local participation in the farmers rights march of 1966 was honoured at a civic reception for the Laois NFA - IFA at County Hall on Thursday night.

Surviving veterans from the march joined with the current IFA Chairman, Francis Gorman and county officers, as well as past chairman and executives to recall a febrile era in farming politics.
In his introductory comments, Council Cathaoirleach Tom Mulhall recalled marching from The Heath to Monasterevin with his father, and then back again. Farming at that time was tough and much more labour intensive.

"It's very important to have an organisation to represent farmers. The 1966 march started the real campaign and ever since then we have had a very strong IFA.
At the time John Quigley was the local county secretary of the NFA and he became the march director.

Cllr Mulhall also read a letter from Minister for Foreign Affairs, Charlie Flanagan who was unable to attend. He referred to the march as a landmark event and noted the role of the IFA in public affairs in Laois. Director of Services, Gerry Murphy also echoed this sentiment.

IFA County Chairman Francis Gorman was a toddler at the time of the marches but he recalled his mother talking about going into Portlaoise to see the march.
"People had to march from Cork to Dublin to get the right to go in and negotiate on our behalf. That is what this march was about.
He thanked the council for the night. He also noted the value of agriculture to Laois. " We are one of the best farming counties in the country, and it is a traditional family farm set up. People are hugely dependent on trying to make a living on it.

Ruaidhri Deasy, the son of the legendary Rikard Deasy said that the march was modelled on Martin Luther King's civil rights march in 1963.
"Agricuture had been completely left behind. Farmers were locked out of any sort of public consultation with the Department of Agriculture.
"The march was the foundation block for what was to come. It engendered a can do mentality in people."

The President of Laois IFA, Jim Holland was one of the participants in 1966. "We had some good times on the road. Dan Bergin was looking after the grub for us, but he was no Gordon Ramsay."

Cllr Willie Aird noted that the abolition of rates was a huge achievement and he saluted the IFA for achieving that. "We sometimes forget the great work and sacrifice that people did.
He drew attention to the behind the scenes activity that underpinned the march. In particular he noted the involvement of Mary Lynch, who was present in the Council chamber, who as a newly qualified chiropodist in 1966 was given the job of looking after the farmers feet. "Such feet as you never saw in your life," quipped Cllr Aird.