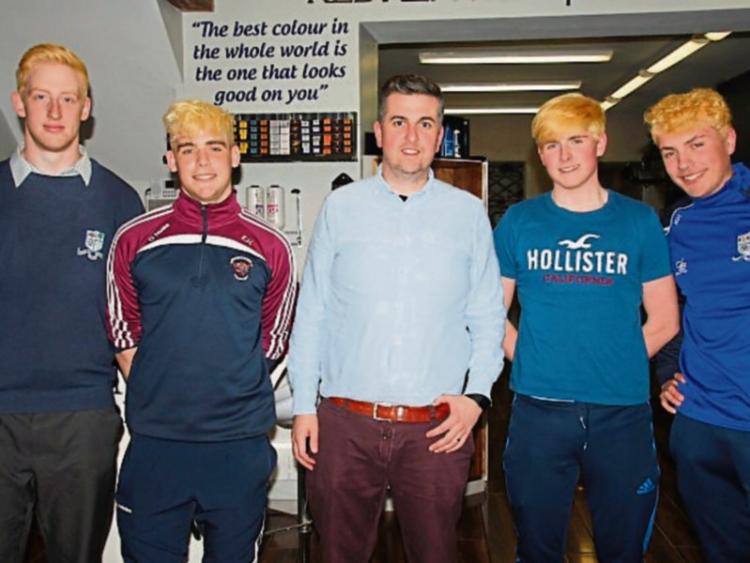 Four students from Mountmellick Community School, have been turned into bleached blonde bombshells, all in the name of charity.

The harder part is yet to come, as the boys are next to endure a leg wax and a head shave, all in aid of the Bone Marrow for Leukaemia Trust charity.

Their motivation was the recent sad passing of Rory Hyland, beloved older brother of Michael and a friend of all involved.

The lads set themselves fundraising targets, promising to wax their legs if they reached €1000, dye their hair at €2000, publically shave their heads at €3000, and doing the whole lot if they reach €4000.

Diarmuid Joyce said it was a first for all of them to go blonde last Thursday.

“We had achieved our set goal of €2000. We were all nervous going in to get it done but we left the hairdressers in very high spirits, looking slightly unusual to say the least,” he said.

“We would like to say a big thank you to Frankies Hairdressing who gave up their time and made us this handsome for free,” he said.

“We are not looking forward to the leg wax but I’m sure I'll look good,” a confident Evan Hunt added, while Michael is asking the community to back them in their continuing fundraiser.

“Come on Mountmellick,” he said, thanking everybody who has donated already.

The waxing and shaving will take place in the school in front of all the students and staff this Friday April 7.

Money can be given directly to any of the four participants, or donated online here.

Donations may also be given at the school office. There are also sponsorship cards in most businesses in Mountmellick. The money will go towards research into finding a cure to the disease and will provide support to people in their time of need.

“Well done to these four amazing students. we are so proud of them,” said MCS principal Larry Curtin.