Garda on duty as scene preserved on Church Street 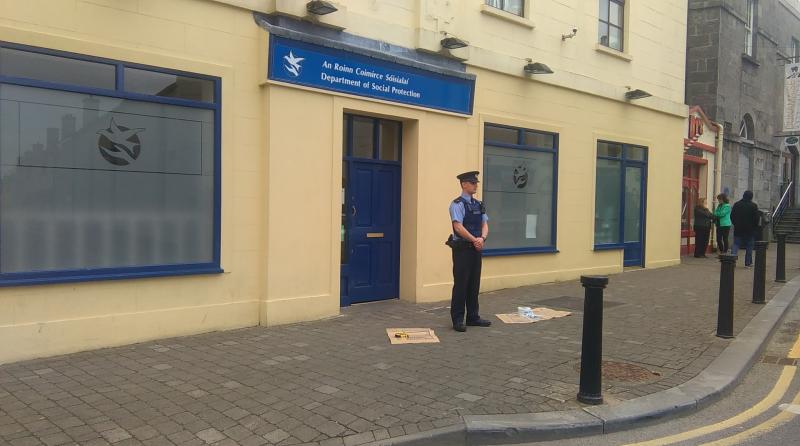 Scene of the stabbing on Portlaoise street this morning

A man has been arrested following a stabbing that took place on the street in Portlaoise this morning.

Gardaí have confirmed that they arrested a man a short time and distance away from Church Street, where the assault happened at about 11am.

"Gardaí are investigating an assault incident that occurred on Church Street, Portlaoise this morning, Thursday 6th April 2017 at approximately 11am.

Gardaí arrested a man, late 20s, a short time and distance away. He is currently detained at Portlaoise Garda Station under Section 4 of the Criminal Justice Act, 1984," the Gardaí have stated.

It is understood that the victim was a prisoner who had just been released from Portlaoise Prison Campus.

About eight Gardaí and an ambulance attended the scene.

A crime scene has been declared at at the Department of Social Welfare Office on Church St which is just around the corner for the town's court house.

A garda is stationed outside the office this morning, with evidence bags covering the pavement.

Local barber and Cllr Caroline Dwane was in her shop at the time of the stabbing, but was unaware of the incident until Gardai called in a door to door visit.

"They told me a man had been stabbed. They were looking in the shores and the bins for a weapon," she said.

Just before the incident, two men were seen walking from the direction of Main Street carrying clear plastic bags of clothes, and are understood to have just been release from prison. The District court was sitting today but it is not clear if the incident stemmed from the courtcase.

The social welfare office is open as normal to the public.