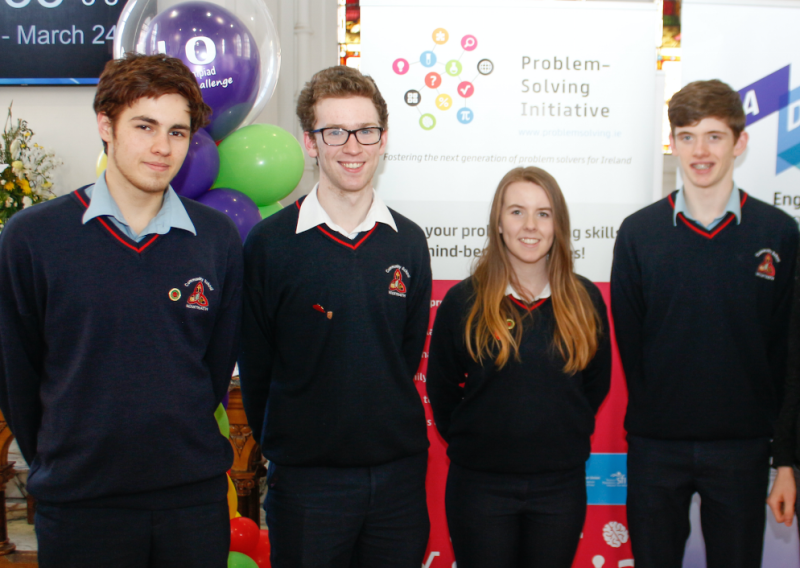 The team consisted of Alex Moore, Domhnall O’Farrell, Aisling Page and Christopher Carrew.  The Mountrath students beat off competition from 42 other schools around Ireland to take the team trophy.

The AILO competition has been run by the ADAPT Centre for Digital Content Technology since 2009 and challenges students to use their ingenuity, creativity and skill to decipher languages with examples of translations.

The AILO final saw the top 100 students out of a starting line up of over 4,000 opponents compete.  Competitors are challenged to engage in ‘code-breaking’ tests to unlock information in unfamiliar languages.  No prior knowledge of a second language is needed with competitors required to use logical reasoning and out-of-the-box thinking to solve the problems presented.

Speaking about the competition, Professor Vincent Wade, Director of the ADAPT Centre said: “The All Ireland Linguistics Olympiad puzzles are a mix of maths, science and humanities.  The increasing popularity of the competition highlights the Irish public’s interest and appreciation for the imporance and applicability of problem-solving skills across science, the economy and society.  We are looking forward to hosting and running a free, family-friendly problem-solving festival in Dublin Castle on 5th August which is open to all.”

Run by the Science Foundation Ireland funded ADAPT Centre, AILO aims to inspire the next generation of multilingual technology graduates, who possess a combination of language competency and problem-solving expertise.  Participants in AILO 2017 received tuition from experts at the ADAPT Centre to assist them in how to approach the puzzles.