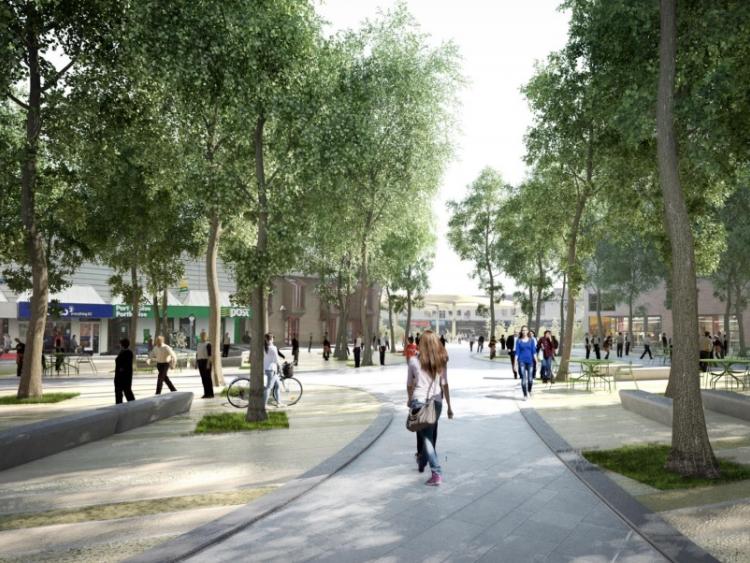 Artist's image of Lyster Square Portlaoise in the next decade

Portlaoise is "not long away from overtaking Kilkenny" in size, according to a local planning expert.

Brian Maher who with GVA Bilfinger has created a controversial 'Public Realm Plan' for a futuristic Portlaoise town centre created over the next 20 years, made a presentation today at the Portlaoise Municipal District meeting.

"Portlaoise is becoming a city whether we like it or not, and there are services that a city needs. Starting today, we hope over time we can incrementally deliver them," he said.

He labelled James Fintan Lalor Avenue, a relief road which splits Portlaoise shops, as "a four lane highway" that is effectively removed in the future, to cure a "disconnect between the old and new town".

"When the link road (from Portlaoise retail park to O'Moore Park) is in place, it has got to be downgraded," he said.

Portlaoise will be a "low carbon" town he said.

"Global warming is happening whether we like it or not," Mr Maher said, noting that driverless cars are already in existance, which will eliminate the need for large carparks, as the cars simply drop and go to their next pick-up.

Part of the main street and all of Lyster square will be pedestrianised as a green space in the new plan, with an underground carpark in the square. Pedestrians would be prioritised first, and cyclists next, instead of cars.

"I don't think it is unreasonable to walk four minutes to get to a shop," Mr Maher said.

Buildings in Lyster Square could go up to five storeys tall, in line with a new 'landmark' building at its centre he suggests, providing apartment accommodation.

The old convent in Portlaoise could be converted to apartments and community use, as has been done in the Naas convent, he suggested, while the entire Triogue river should feature a green walkway through the town he believes.

Director of Services and Portlaoise town manager Kieran Kehoe noted that there is no money for any work, but the plan is "a tool" they can refer to in coming years as the town continues to mushroom.

"Some of it can go into the Local Area Plan in the future. Laois continues to be the fastest growing county, with the youngest population in the country. The plan is to cater for the massive population. We are unique to have developed a town wide statement. We are now getting extensive feedback and the vibes are relatively positive," he said.

There are concerns from local businesses, Cllr Mary Sweeney noted.

"I'd have concerns myself. Businesses are concerned about the impact on them, and they are the lifeblood of the town," she said.

"There's positives, and there's concerns. We're raising the need for business investment for years on the old side of town. What reason will there be for people to walk in the town if there are no shops," she said.

"There would be more cyclists if it was safe. Planners didn't take any notice of safety in the past," he said.