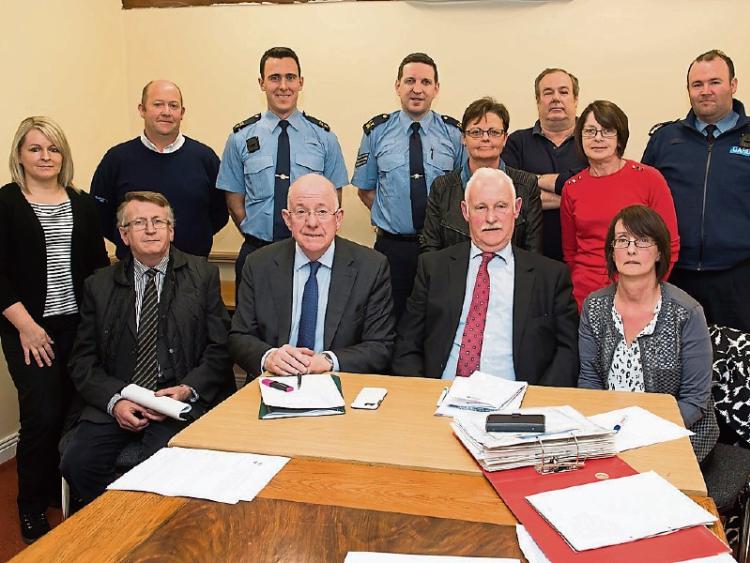 Mountmellick’s plans for CCTV were amongst a number of issues discussed at a public meeting organised by the the Neighbourhood Watch Committee.

The Neighbourhood Watch Group is planning to install cameras around the town to tackle crime and anti-social behaviour. Fundraising has already started.

The estimated price of the CCTV is €24,200. It was explained that a grant may be available but it might would not cover all costs.

It is planned to locate the cameras at all roads in and out of the town, and a few areas around Mountmellick. It is estimated that twelve double cameras will be needed. There will be cameras for vehicles and people at each location.

Letters have been distributed to local businesses asking for contributions to the fundraising. The committee thanked all who have contributed thus far.

CCTV was discussed in advance of the meeting with Laois TD Minister Charlie Flanagan. The committee has also raised the matter with Garda Chief Superintendent John Scanlon. It is understood that he supports cameras for the town.

The committee thanked all who attended the meeting in the MDA on Monday night April 10. Minister Flanagan met with the committee beforehand to discuss the changes in Garda manpower and the recent events that have occurred in the town.

The committee said Minister Flanagan commended them for their work in conjunction with the Gardaí, and has promised his full support by way of looking into replacement Gardaí.

Minister Flanagan extended his apologies for his absence from the public meeting, as he had to attend the Brexit meeting in Portlaoise.

The agenda on the night was an update since the launch in May 2016 and to discuss the installation of CCTV.

Secretary Barbara Lalor said Mountmellick has less Garda manpower compared to that of 2016. She said the Garda Station was rarely opened while anti social behaviour had increased and committee meetings were often cancelled.

However, she explained that since the appointment of Garda Sgt Mick O’Connell in late December the committee feel that more has been achieved since his arrival.

Chairman Cllr Paddy Bracken gave a brief report on population growth from the 2016 census and its shows Laois has grown by 5.1%. The actual break down of towns and villages would not be out until July.

Issues of concern mentioned by those in attendance were the following:

l Disability car parking at the convent unsuitable due to high kerb.

l Carers find it very difficult pushing wheelchairs around the town i.e. cars parking on the paths and the kerbs are too high.

l People pushing wheelchairs and buggies have to go out on the road making it very unsafe.

The general consensus is Mountmellick is not age friendly. Orla Byrne, Chairperson of the Older Persons Forum spoke on issues facing older people, such as accessibility, isolation and access to information.

Sgt Mick O’Connell explained to the group that while he may have only three Garda working with him a lot of progress has been made. He said the Garda barracks will be opened where possible from 11am to 1pm and 7pm to 8pm. Searches were carried out and anti social behaviour is been dealt with.

The Sergeant assured all present that individuals are being dealt with and court cases pending. The Sergeant reminded people in order for them to proceed and act on any matters, statements must be made to the Gardaí.

In relation to phone calls to the barracks, calls go straight to Portlaoise and are logged.