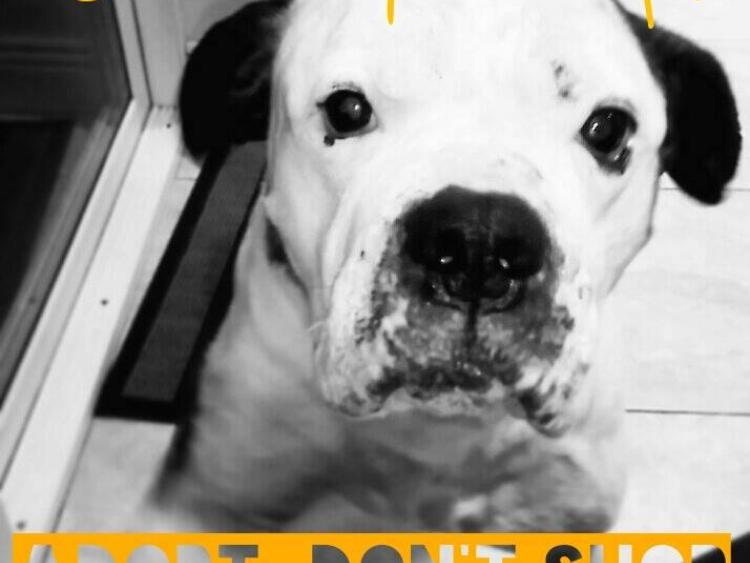 The death of an abandoned Laois dog misused to breed multiple pups, has kickstarted a campaign by Laois SPCA asking the public not to buy dogs and instead rehome a rescue dog.

Sue, an American Bulldog, was brought to Vetcare in Portlaoise last March 7 by a kind gentleman who had found her abandoned in Kyletalisha dump, starved and terrified.

Aged about 8, her body showed the signs of bearing continual litters, which had led to incontinence and the development of mammary cancer. Her skin was raw, her ribs protruding and her leg was badly infected.

"A lot of dogs who are abandoned are cruelty cases, but not as serious as Sue. We don't know where she came from, she could have been driven to the dump," she said.

With the care of her foster carer Andrina Lyons, Sue began to recover, visiting Vetcare and charming all who met her with her gentle loving personality.

"You could see in her eyes how much she adored just being near somebody. She’d often lean her body up against yours just to let you know she was there," said Andrina.

"She had such a beautiful nature. She would have given love in abundance, but obviously didn’t get anything in return. Her puppies would have been taken from her as soon as they could be sold and the cycle started again. It's always the kind dogs that get mistreated the most, rather than ones who attack, its absolutely heartbreaking," Ms Lanigan told the Leinster Express.

Hopes of rehoming Sue died when a lump was found on her body by Andrina, which turned out to be cancerous. It was removed but quickly grew back, and sadly Sue passed away last Friday April 21.

The LSPCA is now hoping her death will send a strong message to the public.

"Please let her life count for something. Sue would not want her puppies to live through the same hell as her. We want people to adopt dogs from rescue centres, not to buy them from unscrupulous breeders. If you can't get to see the mother and father, that should ring alarm bells," said Ms Lanigan.

"The country's rescues and pounds are overflowing with dogs and puppies looking for homes, with loads of love to give. Giving several hundred euro to a breeder for a puppy, doesn’t make it any more lovable. Indeed, you have a better chance of a fully vaccinated, microchipped and vetchecked, healthy puppy from a rescue than you have from a breeder," she said.