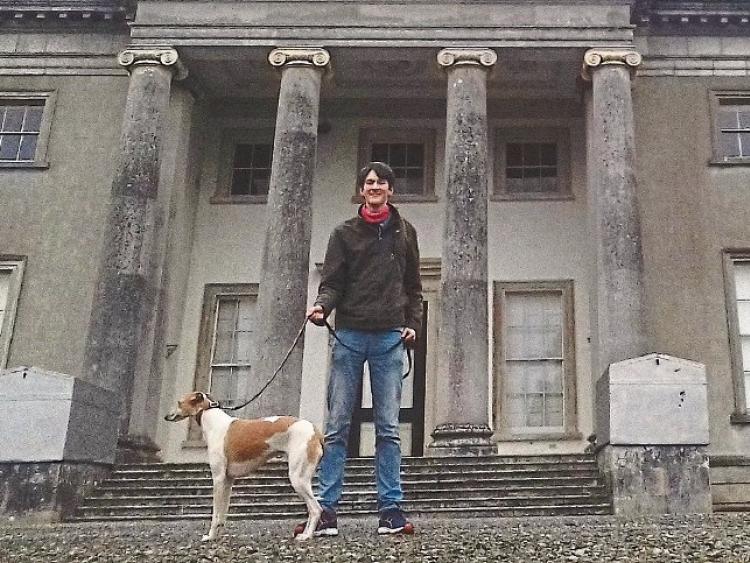 Jody Mulhall and his dog Mouse outside Emo Court.

One of Laois' biggest attractions is to stay open longer for summer, but it is not enough says a local family.

Emo Court's opening hours which were cut a year ago by the Office of Public Works, are to be partially restored for the summer months, but by just half an hour.

The Minister for Foreign Affairs Charlie Flanagan from Laois made the announcement today, Friday April 28.

“In December, I met with Mr Sean Canney, Minister of State for the OPW as I was very concerned at the reduction in opening hours in Emo Court. The OPW has just completed a 12 month review of the opening times and security arrangements at Emo Court and have agreed to extend the opening times for the summer months. From May until August, Emo Court will be open from 8.30am – 9pm," he said.

Evening visitors will no longer have to worry about being locked in, according to the minister.

“It is important to note that the entrance road to Emo Court is closed a half an hour before closing times and the exit road remains open after these times," the Minister added.

Young Emo resident Jodie Mulhall who has organised a 'picnic protest' on his 21st birthday on Sunday May 14 at 7.45pm, welcomed the announcement, but is going ahead with his peaceful picnic on the lawn.

"I am happy about the extension, but i think it should be longer. If they can keep it open till 9pm, why not 9.30, it will still be bright. Half an hour isn't huge. And they will still close at 4pm in the winter" he said.

His mother Louise Drew invites all fans of Emo Court to pack a picnic and join their celebration.

"We will still have the picnic to celebrate the extra half hour, and also to celebrate how lucky we are to have this beautiful place, and in memory of Major Cholmeley who gave it to the state," she said.

Visitors to the historic 18th century house, designed by James Gandon, can also tour the house for free, on the first Wednesday of every month.

“The OPW has waived entry fees into OPW managed properties and heritage sites such as Emo Court House and I would encourage people to take this opportunity to visit these sites and explore the country’s rich and cultural heritage," Minister Flanagan said.