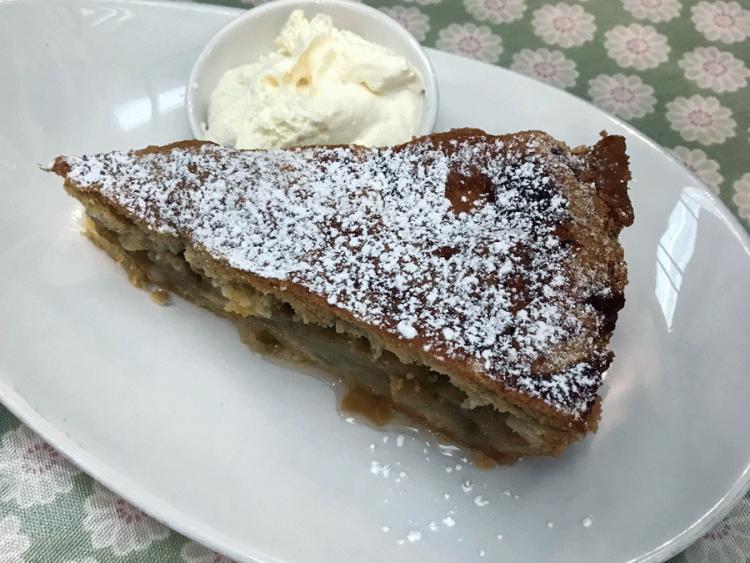 A delightful slice of Imelda Tynan's rhubarb pie features online on John and Sally McKennas' Guide to the best places to eat in Ireland.

"The magic is in the fingers: Imelda Tynan’s baking, in Tynan’s of Portlaoise, is a masterclass in the art of Irish baking," so the intro to the feature by John McKenna and his wife Sally on their site www.guides.ie

John and Sally's praise is to be noted as they also write and edit The Bridgestone Guides to Irish food and hospitality.

"When Imelda Tynan starts to talk about pastry, she speaks as if channeling a higher order. Her language is rapturous, immersed, bewitched. All of a sudden Ms Tynan ceases to be the boss of the hugely busy Tynan’s Restaurant, in The Store Yard, in Portlaoise, and she becomes an apostle, an acolyte, a true believer in the deliciousness of good things. But you don’t just need to listen to Imelda. The proof of the pudding, have no doubt, is in the eating.

"So, order a slice of Ms Tynan’s rhubarb tart. The rhubarb is enfolded in pastry, and the pastry is dusted with icing sugar. There is a little soupcon of whipped cream on the side. Take your fork, and take a bite. Now, when did you last enjoy a slice of rhubarb tart that was so perfectly made, that so perfectly expressed the power and the delights of an almost vanished culinary craft: the art of Irish domestic baking. You can travel the length and breadth of Ireland and never find something like this.

"Ms Tynan learnt her stuff from one of the best bakers in the Midlands, her late brother, Jim Tynan. Before his too-early death, Mr Tynan’s baking in The Kitchen and The Food Hall in the centre of Portlaoise was legendary. When there was little good to discover in the Midlands, Mr Tynan’s food was revelatory. But it was his baking, and his pastry, that were particularly notable. Imelda Tynan is continuing that proud family tradition," says the review.