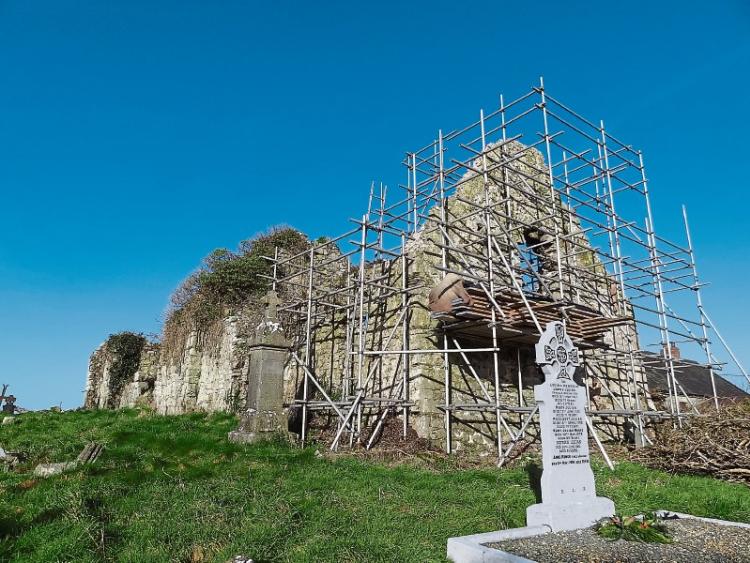 Painstaking restoration has begun on the historic Killabban church in east Laois, to prevent it from collapse.

The ruins near Arles in east Laois, date back to the 13th century, associated with St Abban.

Four walls and a central chancel arch still remain, and Laois County Council, the Heritage Council and a committee are working together to ensure they are safe into the future.

“This type of stonemasonry with lime mortar on a fragile site is specialised, slow and expensive, so the group are tackling it one wall at a time, which is the sensible approach,” explained Laois Heritage Officer Catherine Casey.

The council, as owners of the site, funded a conservation engineer’s report in 2014, used to get a Heritage Council grant of €6,000 towards the €12,000 cost, with the rest paid by the council. Another grant has been applied for this year.

“Hopefully work will recommence if they are successful. We should know in May. Because of the scale of grant funding available, the work is being done in small phases, it could be 5 years or more before it is completed, depending on available funds each year.

“When completed the conservation works will mean the site will be conserved and remain in place for future generations to access safely,” said Ms Casey.

An annual mass is held at the religious site each summer, and the public can access it at any time except during construction work.

Cllr John Moran is on the committee, and he thanked Ms Casey for her support at a recent council meeting, where she outlined progress.

“Thank you Catherine, you get five stars for this, you’re a very important person in this council,” he said.

St Abban founded a church in area in 650. The existing ruins date to 13th century. The graveyard contains 18th and 20th century headstones