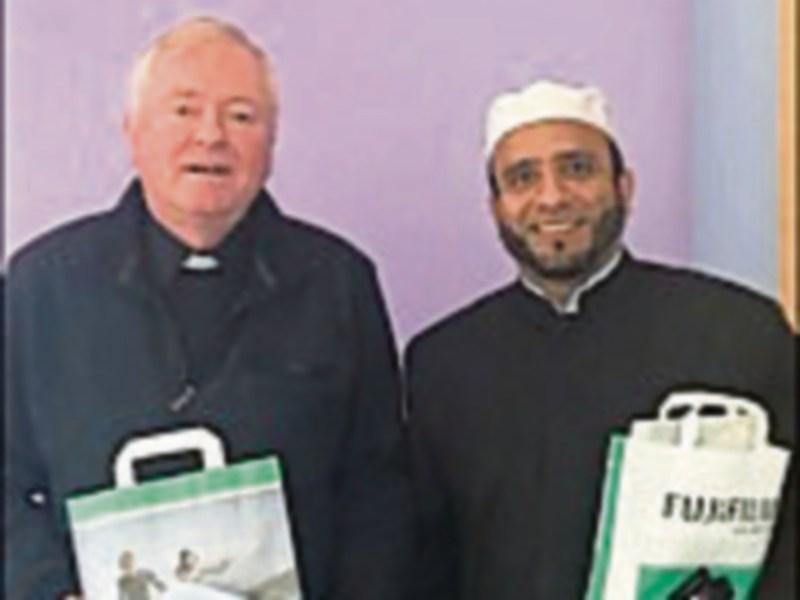 Portlaoise Parish Priest Msgr John Byrne is encouraging the community to welcome their new Muslim neighbours, assuring them that there is nothing to fear.

“Islam is a religion of peace. Scare headlines can engender fear. There is nothing more fearful than the unknown. When we get to know people on a human level, we realise there is nothing to fear,” he said.

They both shared a moment of reflection and silence to mark the recent chemical attacks in Syria, and the deaths of innocent children and adults.

Sheikh Ahmed thanked Msgr Byrne for “positive integration and inclusion of refugees, asylum seekers and Muslims in general”, and for his continued support of all communities in Portlaoise.

Msgr Byrne said it was very important that they made contact.

“We reached out in a spirit of welcome. It’s very important that we reach out to new members of our community, particularly those from abroad, the 13 Syrian families housed here, and the general Muslim population,” he said.

“It is important that we develop cordial relations. There is nothing like meeting with each other, face to face, we are all human beings,” Msgr Byrne told the Leinster Express.

He acknowledges that some people feel fear about the growing Muslim community.

“The Muslim community feel under pressure I am sure where fundamentalist terrorists commit atrocities. It’s a bit like the IRA, it was easy for Irish people to be labelled terrorists. Islam is a religion of peace fundamentally. The only way to counteract fear or isolation, is to ensure integration” he said.

The Portlaoise parish has shown a welcome to the 13 Syrian refugee families, a total of 54 men, women and children, who arrived to Portlaoise in 2015. The parish also gives support to residents in the Montague Direct Provision Centre who are awaiting refugee status, some for many years, as well as the general Muslim community.

“We have well established ties, particularly with the Syrian families, the parish centre is a place where they meet,” Msgr Byrne said.

Those families have met many challenges he said.

“They have challenges around the language and the culture, but they are settling in well, particularly the children who are in school. It is powerful to see those children grow and play as children should, not in a wartorn situation,” Msgr Byrne said.

The religious leaders met at the April monthly meeting of Laois Integration Network in the parish centre.