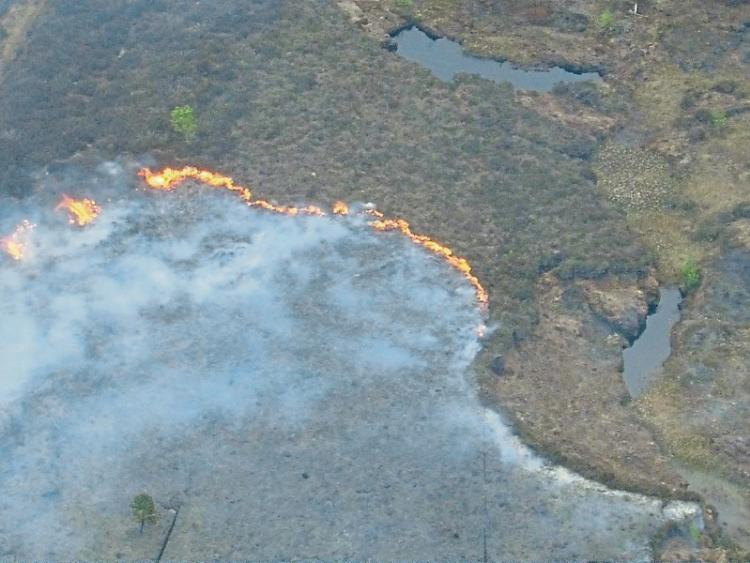 Three men are understood to have been hospitalised following a wildfire on a Laois bog which has lingered since breaking out last week.

It is understood the men, who were working fore or contracted to Bord na Móna, attended to scene of a fire between Portarlington and Mountmellick at Garymore last Friday evening, May 5.

The men were on the scene in the early stages and attempted to dampen the fire but soon became overwhelmed by smoke. It is understood that all three men, who are from the area, went to hospital and at least two were detained overnight for treatment.

Laois Fire and Rescue Service attended the scene after the men were forced to retreat. It said the fire required further attention on Monday and Tuesday as sections of peat and heather continued to rekindle.

Mountmellick, Portlaoise and Portarlington fire crews were in attendance at various stages over the last few days. Laois Civil Defence were called in to deploy a drone to help tackle the fire at its height.

In relation to the injuries, a spokesperson was unable to provide details but confirmed that people were affected but the injuries were sustained prior to the fire service's arrival on the scene.

Meanwhile, another fire in bog and scrubland occurred at Kilbricken on Sunday threatened a private plantation but was contained by Mountrath fire crew working in conjunction with a number of locals.

Last week the an area of bog was set alight as a result of rubbish being dumped near Portlaoise. The fire was contained thanks to the prompt action of the Laois Fire and Rescue Service but the fire was reported to the Gardaí to investigate.

The fire service warned the public that fire risk remains high in Laois.

"Weather conditions are expected to remain severe for the remainder of the week, so we would ask the public to continue to exercise particular vigilance in relation to fires," said a spokesperson.

Coillte's biggest area of State-owned forestry is located in Laois in the Slieve Bloom Mountain range which also runs into Co Offaly.

Coillte will be anxious to avoid losses in Laois caused by fire that it has suffered in Co Galway in the Cloosh Valley where 1,500 hectares of forestry and 2,000 hectares of bogland have been destroyed.