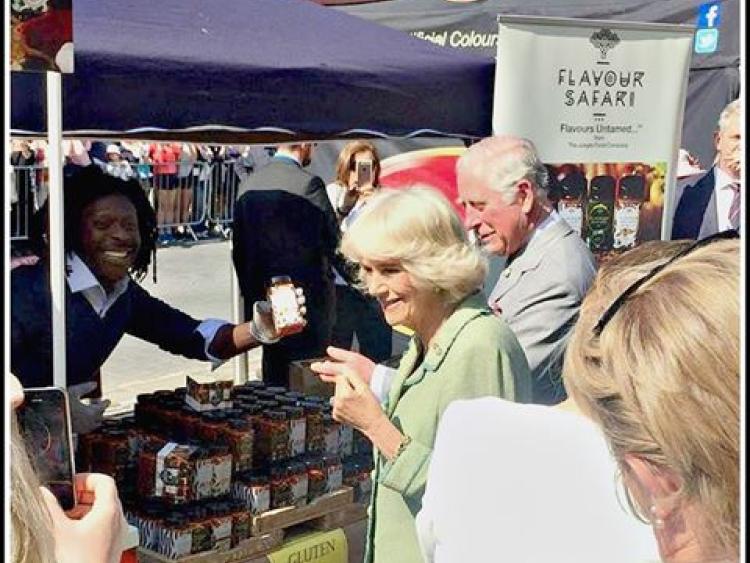 Mountmellick's Michael Onalimi with Prince Charles and the Duchess of Cornwall

Spicy Laois sauces have won a prince's seal of approval, to the delight of their Mountmellick creator, Michael Onalimi.

Prince Charlies and the Duchess of Cornwall tasted his Flavour Safari sauces while touring in Kilkenny yesterday May 11, and accepted a jar from a beaming Michael.

The food company has also won a stand at the Taste of Dublin exhibition, after an online voting competition.

"What a Day! Not only did we win a stand at Taste of Dublin but we also proved that our FlavourSafari Sauces, Ireland's First African inspired sauce range, are fit for a King! Can't get closer than The Prince of Wales," said Michael, who grew up in Lagos, Nigeria, now firmly settled in Mountmellick with local wife Tara and their young family.

A regular at food shows, his bubbly persona and delicious sauces have won many fans, and the royal couple were no exception, even chosing their favourite flavour sauce.

"Our mild Tomato & Herb was his Favourite," the delighted entrepreneur announced on social media.

The Flavour Safari range of delicious award winning sauces combine African spices and quality Irish ingredients. Tasty and versatile, the gluten free sauces can be used hot or cold, as dips or in meals, and are on sale in SuperValu and many other shops.

The Taste of Dublin exhibition takes place in the Iveagh Gardens this June 15 to 18.