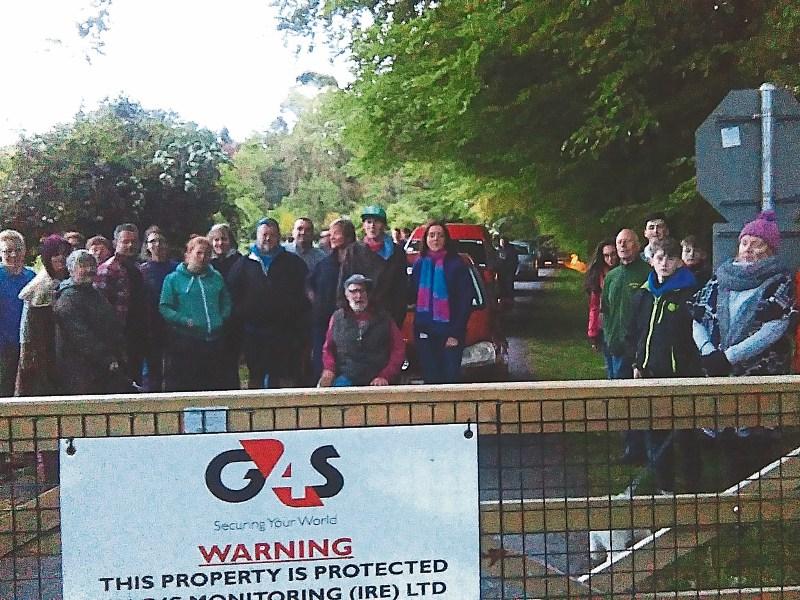 The Office of Public Works has begun an investigation into an incident at Emo Court last weekend, when up to 40 people were locked in by its security staff.

A large group of locals had attending a 'picnic protest' over closing times at Emo Court on Sunday night May 13, were locked in for over an hour by OPW staff.

About 40 people including a wheelchair user were locked into the grounds, after a security firm working for the OPW, locked the exit gate without warning and drove off, minutes after closing time.

The group had understood that recent changes included leaving the exit gate open to allow people to leave after closing time.

They eventually called the Gardaí for assistance, after calls to the security firm brought no-one back.

They had to wait an hour and ten minutes before a security man came back to unlock the exit gate to the estate, by then in full darkness.

The OPW was asked by the Leinster Express why the visitors were not notified verbally at closing time, and what would happen in the case of an emergency.

A spokesperson has replied with the following.

“The OPW is aware of an incident that took place at Emo Court on Sunday 14th May, and an investigation into the events is ongoing.~”

The statement goes on to say that it aims to facilitate as many visitors as is safe.

“Emo Court is both a much-loved local amenity and a heritage property of national significance. It is the OPW’s objective at all times to facilitate as many visitors to Emo Court as possible, while ensuring the safety of visitors and the preservation of the property,” the press office stated.

The 'Emo Court After Hours Picnic Protest', was organised by young Emo resident Jody Mulhall, who is on the ASD spectrum, and walks daily in the grounds.

He is calling for restored opening times at Emo grounds. They were cut last year to 8.30pm in summer, and 4.30pm in winter, with taller fences erected to keep walkers out, as well as CCTV and a security firm hired by the OPW.

Recently the time was extended by half an hour in summer, but Jody and his supporters felt this was not enough, and so went ahead with their peaceful picnic.

They had understood that the exit gate would remain open after 9pm, following the announcement of the extra half hour by Minister Charlie Flanagan, when he stated that "the entrance road to Emo court is closed a half an hour before closing times and the exit road remains open after these times".

"We were all under the impression that the gates would be left open after these hours, no-one came over to tell us. It was handled badly, to leave us so long was ridiculous," she said.

In all 16 cars were queued up waiting to go home.

Jody had arranged the protest on his 21st birthday, such is his love of the estate.

“If people try to make it stay open for longer, that is what I would like for my birthday,” he had said.

About 70 friends and supporters attended a picnic in the grass carpark, with one birthday cake in the shape of Emo Court, baked by local lady Carla Dunne and her son Ethan, and another gifted from Jody's club Mountmellick Macra, by Mary and Amanda Lowry .

Among the picnickers was Emo resident Kathleen Burke who has walked every morning in Emo for 50 years.

She told the Leinster Express why she was there.

"I walk around the edge, I don't come near the house at all, but now it's completely guarded up with fences I can't even climb over, I'm 74 years of age, and I've tried everybody. I go to mass every morning at 8 o'clock and come here after. I've brought my grandkids down that walk, and my kids down, I don't think it should be closed at all, all I want is a stile or a little opening. I'm here to protest in earnest with Louise, I'm so angry about this," she had said.

Louise said many gates around the estate had traditionally never been closed, allowing local people to walk through Emo demesne, gifted for the state to enjoy, by the late owner Major Cholmeley.

~She suggests the OPW rent three empty coachhouses and give a tenant the job of gatekeeper.

Despite being locked in, the group stayed calm, with Jody bidding everyone farewell and thanks as they finally drove out.