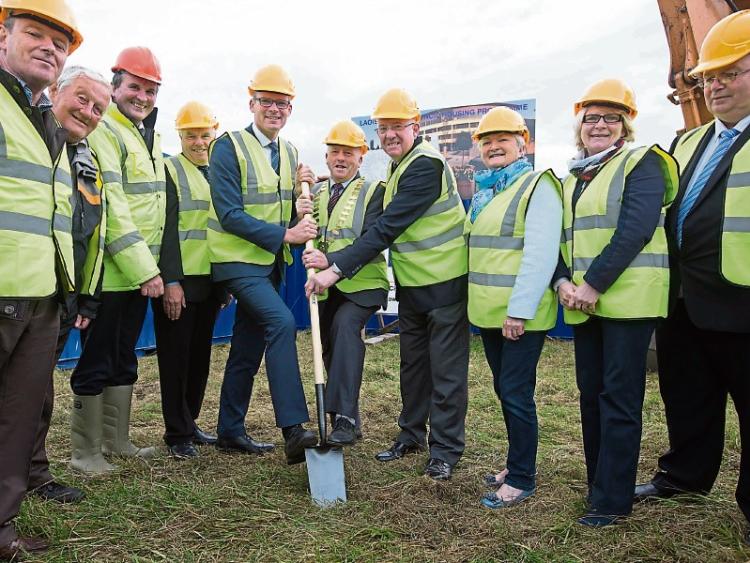 Cllr Tom Mulhall turns the sod with Simon Coveney and Charlie Flanagan on a new housing development in Portlaoise.

Enda Kenny is leaving on a 'high' and he should be replaced by Simon Coveney, according to the Cathaoirleach of Laois County Council and Fine Gael councillor Tom Mulhall.

Speaking to the Leinster Express Cllr Mulhall praised his outgoing leader and Taoiseach and wished him well on his retirement.

"He was good for the party," the Emo councillor said of the Mayo TD.

He said that like any politicians, Mr Kenny had "his highs and lows" but he praised general his performance over two governments.

"I would say our Taoiseach is going out on a high. He is well respected all over Europe and wider world," he said.

Cllr Mulhall did not believe that Mr Kenny could be held accountable for the backlash Fine Gael councillors felt at the 2014 local elections. Some 100 council seats were lost nationally while the party's majority on Laois County Council was wiped out and the seat number cut from 12 to six.

"Fine Gael came to power at a terrible bad time for the country and had hard decisions to make. That landed us as local councillors in the local elections in 2014 with a hill to climb...It was tough campaign but I wouldn't blame that on Enda," he said.

As to the future Cllr Mulhall said the party has "two good candidates" in Leo Varadkar and Simon Coveney and there was talk of a third candidate. He is throwing his weight behind the Housing Minister.

"I will be supporting Coveney," he said.

Cllr Mulhall said the rural connection and Minister Coveney's time in the Department of Agriculture is a factor in his choice of the Cork TD over the Dublin TD.

"He did a good job when he was in Agriculture. It is a tough portfolio. He has a very tough job at the moment as Minister for Housing. He is taking that seriously and dealing with it.

"He would be a quite capable of leading the party and the other man Leo Varadkar would as well...but I would be sticking my neck out and saying I would be supporting Coveney," he said.

Cllr Mulhall said he would support whatever candidate is elected and Minister Varadkar would also make a good leader.

He said he did not see any major failings with Minister Varadkar and his choice was more down to Minister Coveney's attributes and work in the past.

Cllr Mulhall said the country could not afford a "long winded campaign".

As to which man could make the current Government last, Cllr Mulhall felt Minister Coveney would be the candidate to "steady the ship".