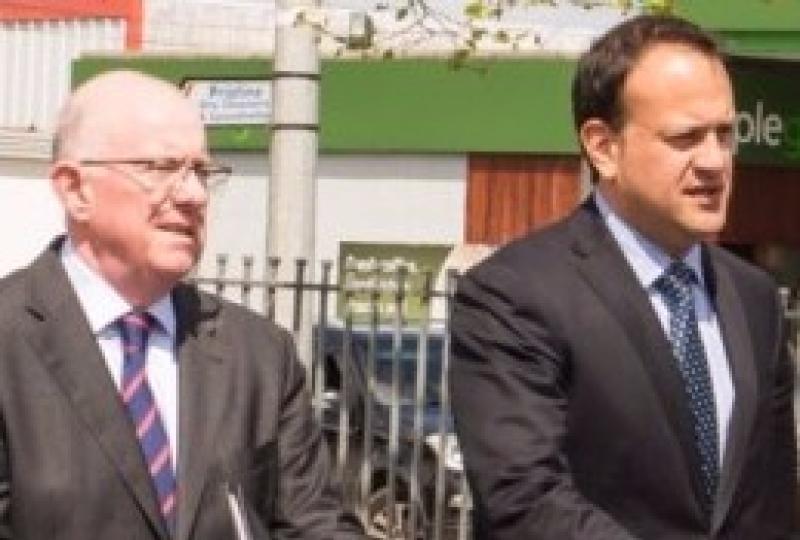 Minister for Foreign Affairs and Trade, Charlie Flanagan and the then Minister for Health, Leo Varadkar in 2015 at Portlaoise hospital. Photo: Denis Byrne.

Laois TD and Minister Charlie Flanagan did not demand that he keep his place in Government before throwing his weight behind Leo Varadkar in the Fine Gael leadership race.

Speaking to the Leinster Express, the Minster for Foreign Affairs and Trade also admitted that the future of Portlaoise hospital is an issue Varadkar will have to face for the second time in his political career.

Minister Flanagan announced on Friday that he would back the Minister for Social Protection for the top job over Cork TD and Minister for Housing, Simon Coveney.

"I am supporting Leo Varadkar having given the matter great consideration," he said.

He said it is important to leave austerity behind and Minster Varadkar can lead the way forward.

"This is a chance for a new and ambitious direction for Fine Gael and the country. Leo is the man for the job. It was a difficult decision because they are two quality candidates who I work with and know well but I gave the edge to Leo. He is young, dynamic and enthusiastic and committed to politics and his country," he said.

Minister Flanagan said the winner will have a 'very short honeymoon'.

"There is a very fragile Dáil and Government and agreement with Fianna Fáil. The current programme for Government is far from complete so whoever the leader is, he will have a very difficult task," he said.

As to his own future, Minister Flanagan hoped to return to Government but he did not discuss it Minister Varadkar.

"That is a matter entirely for the leader. I have enjoyed being in cabinet," said the Mountmellick native.

Minister Flanagan said it would be "presumptuous" and  "foolish" to discuss ministerial jobs in advance of the outcome but he admits that he wants to return.

He said Northern Ireland and Brexit are 'very live' challenges in his Department and he had been working on both on a full time basis.

"There is an argument for continuity. I will be putting forward my experience," he said of his case for a Ministerial seat.

Minster Varadkar took a hands-on approach to the crisis at the Midlands Regional Hospital, Portlaoise when he was Minister for Health. He met bereaved families who lost babies at Portlaoise's maternity unit. He spent several hours speaking with them at a meeting in Portlaoise.

He also spent a substantial amount of time at the hospital with staff and management. He was in the hot seat when the highly critical Health Information and Quality Authority report on all services at Portlaoise was published.

This report recommended that a plan be drawn up for the hospital. A plan from the HSE and Dublin Midlands Hospital Group eventually emerged. It is understood to recommend downgrade and is on the desk of Varadkar's successor in Health Simon Harris. He must decide whether to adopt it or scrap it in favour of investment in Portlaoise.

It is the biggest hot potato facing Charlie Flanagan in Laois and is an issue which Minister Varadkar is likely have to deal with again if elected Fine Gael leader. Minister Flanagan felt the leadership candidate has a good understanding of the issue and has made positive statements but he did not wish to predict what would happen.

"Minister Varadkar was in the hospital. He knows the hospital and should he be successful he knows that it will be an issue that will be on his desk," he said..

Minster Varadkar has not had a great relationship with Fiannna Fáil but without their backing, Fine Gael would not be in power. Minister Flanagan felt times have changed and Minister Varadkar would focus his attention elsewhere if elected.

"We're in a new era of politics...I expect Leo Varadkar to take a strong line against the populist left, independents and Sinn Féin who continue to propose simple solutions to complex problems. They play on fears and offer cheque book solutions with no regard for financial responsiblity," he said.

He expected that Leo Varadkar would be a "prudent manager" who would build on the success of the last number of years. Minister Flanagan said the new Taoiseach would have to reinforce the values and principles of Fine Gael.

He praised the "great service" Enda Kenny gave to the party and country in his six years as Taoiseach.

"He brought the country back from the brink. He took over when the country was in receivership. He restored our sovereignty and managed the Government in the most challenging of times," he said.

Minister Flanagan said that when Mr Kenny became leader the unemployment rate was over 15% but it is now just over 6%. He said the Taoiseach was part of a Government that made some very harsh decisions for the good of the country.

"He was a good Taoiseach," said Minister Flanagan.

The Laois TD went against Mr Kenny in an unsuccessful heave in 2010. He was Fine Gael's spokesperson on Justice at the time but did not make it to cabinet.

Mr Flanagan took over as Fine Gael Parliamentary Party Chairman and in 2014, Mr Kenny brought him in from the political cold by appointing him to cabinet as Minister for Children. Within the same year the Laois TD was promoted to the Department of Foreign Affairs and Trade a post he kept in the new Government.

"I was very privildged to serve in Enda Kenny's Government and enjoyed every day of it. I got on with Enda Kenny in all jobs I had. I found him personally very helpful, encouraging and with great compassion ," he said.