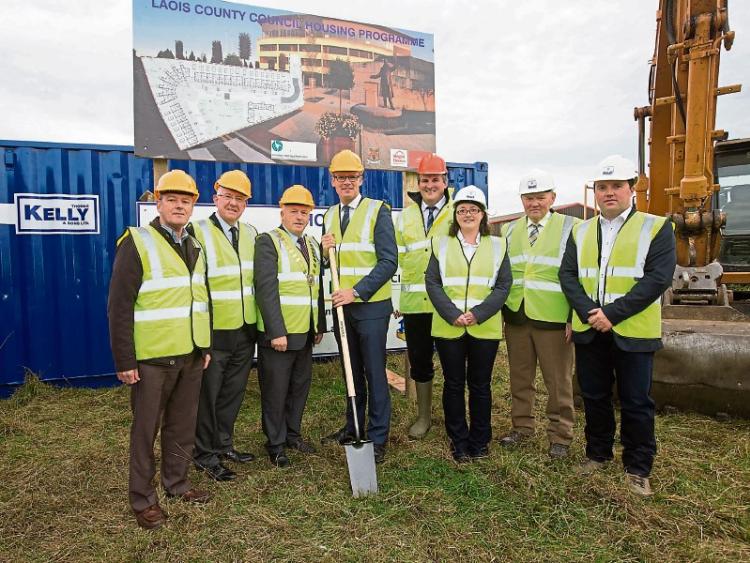 Simon Coveney turns the sod on a new public housing development in Portlaoise.

Some 10,000 people are commuting from Laois' main town Portlaoise to work in Dublin each day, Fine Gael Leadership candidate Simon Coveney has claimed lauching his campaign to be chosen over Leo Varadkar.

In a speech launching his campaign in Dublin, the Minister for Housing and Local Government claimed that a plan was needed for Dublin to make it the most dynamic city in the EU if not the world. However, he said said there was no plan for this or to develop other parts of Ireland.

"Instead, most of the young people that live in Dublin work in commuter towns up to an hour away in places live Navan, Maynooth, Kildare, Naas, Clane.

"There are 10,000 people who commute from Portlaoise every day. Most of them spending three hours each day in their cars time they could be spending with their families or on the sports field or in the office if that is where they want to be. Surely we are smarter than that.

If made leader and Taoiseach, he promised to bring a new plan to Government called that Ireland 2040 plan. He said this could focus on other cities and large towns that could become "rural regional drivers in other parts of Ireland".

"I can never remember in my lifetime a national plan for Ireland," he said.

He said now that the country has a stable economy there is a need to put together a national plan. He said doing so would involving spending money on infrastructure to rebalance the country.

Minsiter Coveney does not have the backing of Laois TD and fellow Minister, Charlie Flanagan. He is backing Dublin TD Leo Varadkar.

As Minister for Foreign Affairs, Minister Flanagan has been responsible for Brexit. Minister Varadkar says Minister dedicated to Brexit is now needed.

The next leader will almost certainly replace Enda Kenny as Taoiseach.

Laois members of Fine Gael will have a chance to see both Ministers in the flesh on Friday, May 26 at the Barrow Centre, IT Carlow.